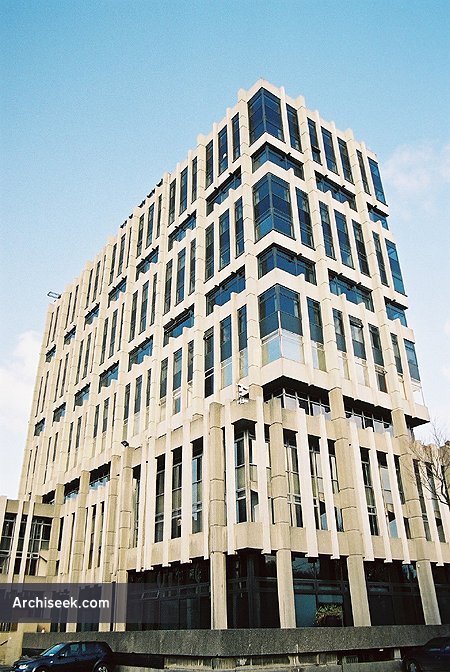 Thirteen floors of office space in a very sensitive location behind Fitzwilliam Place and on the banks of the Grand Canal, Fitzwilton House is Basil Gouldings gift to Dublin. Goulding’s track record with architecture was pretty good – his house in Kinsale by Robin Walker is considered a classic, as was his pavilion by Ronald Tallon near Enniskerry.

The planning permission for this building was got in 1964, just three weeks from the new planning laws coming into force that would have stopped it. With 75,000 square feet, and a muscular concrete exo-skeleton, it was a dramatic building in an attractive location. When viewed from different directions along the canal, and in different lights, it can appear quite different.

The exterior skeleton is such a forceful feature that you feel that an extra three floors would have made a truly eyecatching building increasing the vertical aspect. However that would have ruined the Georgian streetscape that exists behind.

In June 2016, planning permission was granted for its demolition. Demolished late October 2018.