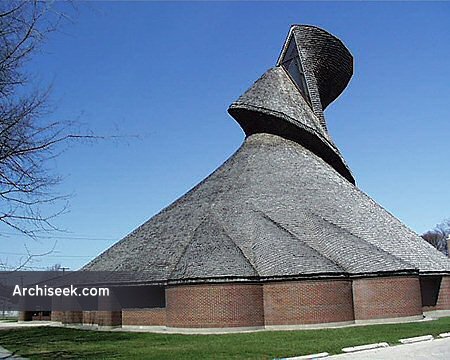 Perhaps local architect Étienne Gaboury’s best-known work, the Église du Précieux-Sang in St. Boniface was completed in 1967. Incorporating the reforms of the Second Vatican Council, the church was designed to express “the dynamic movement of the congregation around the altar while still acknowledging the symbolic and functional requirements of the sacramental spaces.”

From this, Gaboury evolved his design towards a spiral structure, progressing from a clockwise plan which encouraged the free movement of the congregation while emphasising the hierarchy of liturgical function. As the church was intended to house a largely Metis congregation, Gaboury took his inspiration from “a non-Christian but Prairie idiom – the native Indian tepee.”

The interior of the church features a nave proper of approximately eighty-eight feet in diameter, with a full width of 145 feet. Twenty-five laminated wooden beams, from seventy-two to a hundred feet long, swirl upwards to a height of eighty-five feet to support the roof which is comprised of stained cedar deck on the interior and rough cedar shingles on the exterior The rising beams climax in the natural formation of the open skylight, an echo of the tepee’s smoke-hole, which introduces light as the central focus of the structure.