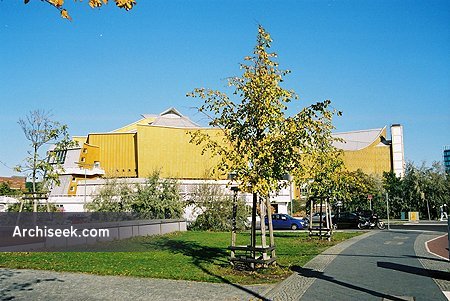 The Philharmonie was the first of a series of buildings which would create a Kulturforum (including the Kammermusiksaal, Staatsbibliothek, and Neue Nationalgalerie) in an area of Berlin leveled before the war by Speer. The site of the Kulturforum was near the former center of Berlin at Potsdamer Platz and was adjacent the the Berlin Wall and was intended by Scharoun to be the seed of a cultural center for a reunited Berlin.

Its form derives from the unusual and acclaimed configuration of the concert hall, in which the stage is surrounded on all sides by the audience. The rows of seats are further broken up into tiered blocks, creating a condition in which the concert-goer is made to acknowledge both performance and audience in new ways. As the audience is made acutely aware of its physical location during a performance, changes in level generated by the theater configuration are played-out sculpturally and spatially in the public areas outside the theater itself. The exterior is designed not as a facade in the classical sense, but portrays a building designed from the inside-out. Like his other buildings in the Kultureforum, the Philharmonie is clad in gold anodised aluminium panels