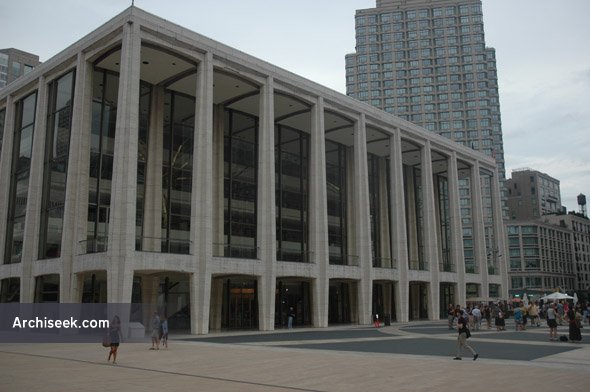 Part of the Lincoln Center for the Performing Arts, and designed by Max Abramovitz ,the hall opened in 1962 as Philharmonic Hall, home of the New York Philharmonic, after the orchestra moved from Carnegie Hall. The hall was renamed after Avery Fisher, a member of the Philharmonic board of directors, following his US $10.5 million donation to the orchestra in 1973.

During the design process. the acoustical consulting firm of Bolt, Beranek and Newman (BBN) was hired to design the interior acoustics for the hall. Based on their experience designing and analyzing existing concert halls, BBN acousticians recommended that the hall be designed as a “shoebox” with narrowly-spaced parallel sides with seating for no more than 2,400 patrons. However, a campaign by the New York Herald Tribune to increase the seating capacity of the new hall led to an internal redesign which invalidated much of BBN’s acoustical design.

Several attempts were made to remedy the acoustical problems of the new Philharmonic Hall, with little success, leading to plans in the 1970s for a substantial renovation project designed by noted acoustician Cyril Harris with project architect Philip Johnson. These renovations included demolishing the inside of the hall and rebuilding a new hall within the outer framework and facade. While initial reaction to the improvements was favorable, overall feelings about the new hall’s sound soured, and the acoustics of Avery Fisher Hall continued to be problematic. The ongoing problems with the hall’s acoustics eventually led the New York Philharmonic to consider moving many of its concerts to Carnegie Hall in 2003.