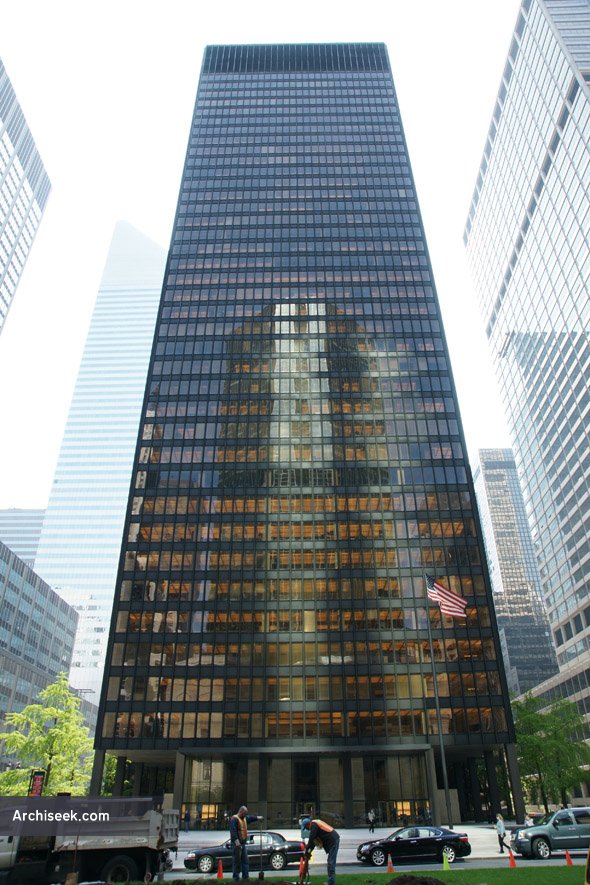 Generally recognized as the finest example of skyscrapers in the International Style. Much of the building’s success comes from its elegant proportions, and its relation to the overall site. It appears as a simple bronze box, set back from Park Avenue by a large, open granite plaza. Mies intended to create an urban open space in front of the building, despite the luxuriousness of the idea, and it became a very popular gathering area. In 1961, when New York City enacted a major revision to its 1916 Zoning Resolution, the nation’s first comprehensive Zoning Resolution, it offered incentives for developers to install “privately owned public spaces” in an attempt to emulate that of the Seagram’s Building.

The building’s external faces are given their character by the quality of the materials used – the tinted glass and the bronze ‘I-beams’ applied all the way up the building. Mies had first used similar applied I-beams at his 1951 apartment towers at Lake Shore Drive in Chicago, welded to the outside of the structural columns.

On completion, the construction costs of Seagram made it the world’s most expensive skyscraper at the time, due to the use of expensive quality materials and lavish interior decoration including bronze, travertine, and marble. The interior was designed to assure cohesion with the external features, repeated in the glass and bronze furnishings and decorative scheme.