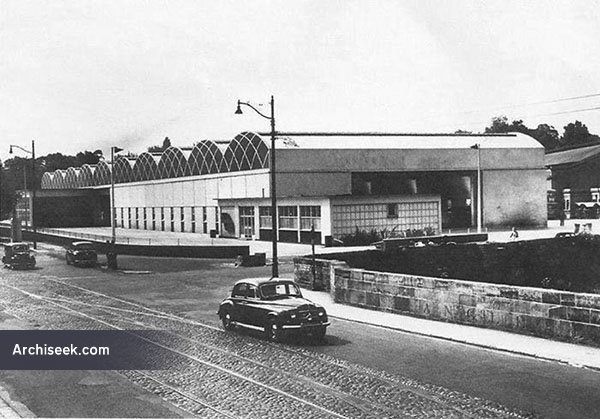 Donnybrook Bus Garage was completed in 1952. This was a much more radical building than the Inchicore Chassis Works and was designed in association with the Danish engineer Ove Arup (1895-1988) whom Michael Scott persuaded to set up offices in Dublin (the first overseas Arup office).

Donnybrook Garage was carried out by some of Scott’s staff in association with another architect Jim Brennan (1912-1967), who in some journals is credited with the building although Scott’s firm is usually listed. Brennan had previously worked for Scott in the late 1930s on Portlaoise Hospital and Scott’s team on this project included Patrick Scott and Kevin Roche. Originally it was the first of a series of eight proposed garages for one hundred buses to be built to the same design around the country. It was the first building in the world to have a concrete shell roof lit by natural light from one end to the other. Each shell was poured in situ with large wooden moulds that were dismantled and moved on to form the next one. This form was suggested by Arup as a suitable approach to the design. The other seven garages were never executed and the concrete moulds were destroyed after the completion of Donnybrook due to Government politics and the advice of a senior civil servant Dan O’Donovan. O’Donovan was a man of very strong personal convictions on building and was later to be appointed to oversee the building of Busáras, to the despair of Scott.

Externally the building’s elevations are dictated by the roof form which is visible along the sides. Smaller flat roofed buildings were built next to it but do not intrude on the distinctive shape of the building. The faith that Scott showed in the ability of Arup, in allowing him to dictate the external appearance of the building through its engineering was to be repeated at Busáras. Decorative ribs are visible along the side elevations. Originally it was coloured externally in a grey and yellow paint scheme designed by Patrick Scott, which has since been painted over. Internally the garage is an imposing well-lit internal space uninterrupted by columns or internal walls.