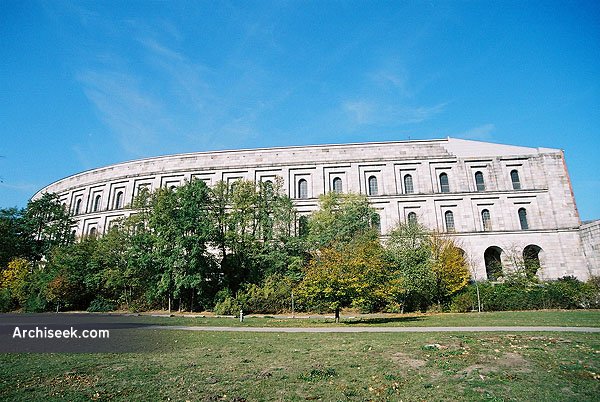 Even if you didn’t know its history, this is not a nice place – the fact that the building remains unfinished only makes it more eerie. But knowing what it was intended for, makes the building quite menacing.

Hitler conferred upon Nuremberg the title, “City of the Party Rallies” for mainly pragmatic reasons. Up to one million Party members would travel to Nuremberg for the week-long rallies, completely swamping the city, and the city, situated in the centre of Germany was easily accessible. Hitler also wanted to appropriate the city’s history for the glorification of the Nazi party. A large auditorium was needed for this once a year event and so Hitler commissioned the Congress Hall. The Hall was designed to hold over 50,000 people, but was never finished. The horseshoe-shaped building covers a total area of about 300 x 300 metres. The scale of this structure is overwhelming with an immense arcade running around the lower level of the u-shaped structure. The arcade only serves to dwarf the visitor and make them feel more insignificant in the face of the Nazi system. The monumentality of the building is increased by the simplicity of the over-sized architectural detailing. The facade of the Congress Hall is made of granite slabs, to make it appear as monumental as possible. The body of the building, which in its final form would been have completely concealed, consists of brick and reinforced concrete and this can be seen in the courtyard.

The interior was never completed, all that was completed was the exterior structure. The proposed auditorium space was used as a surface carpark for many years and indeed still is. After sitting empty for some years, various plans were mooted including conversion into a shopping complex. Recently a new museum has opened in one wing of the building – the Documentation Centre Nazi Party Rally Grounds.