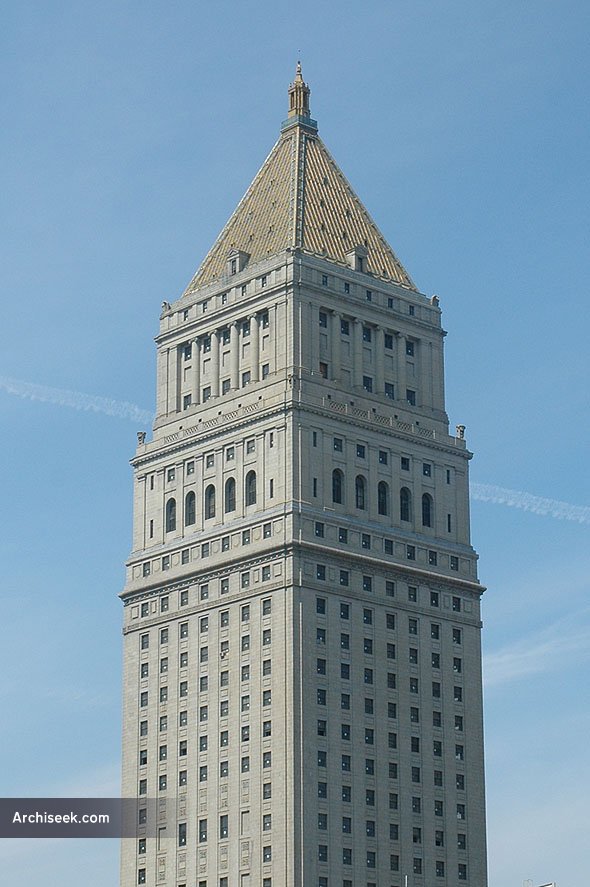 The Thurgood Marshall United States Courthouse has two major parts, the seven-storey base and the thirty-storey tower. Commissioned in 1931, construction began in July 1932 and lasted three and a half years. After Gilbert’s death, construction was supervised by his son Cass Gilbert Jr. It was listed on the National Register of Historic Places (as U.S. Courthouse) on September 2, 1987.

The six-story courthouse base has seven stories and is marked by a pilastered facade and a colonnade. Built around three interior courtyards, it is rusticated and irregularly shaped, following the outline of the site. Massive granite steps flanked by large pedestals lead up to the main entrance on Foley Square. Gilbert intended the pedestals to bear two monumental sculptural groups, but they were never executed. Ten four-story Corinthian columns form the imposing portico that shelters the entrance. The ends of the entablature above are embellished with roundels, on which are carved the heads of four ancient lawgivers: Plato, Aristotle, Demosthenes, and Moses.

A 30-story square tower is 590 feet in height and is set back from the base parallel to the front of the building. The tower is set back slightly on the 27th floor, marked by urns at the corners. The roof of the tower is pyramidal, pitched steeply, and made of terra cotta, with a gold leaf, with a small open lantern, also gold-glazed terra cotta, at the top.

The building contains 35 courtrooms. Sixteen are original to the courthouse: Five in the base and eleven in the tower, including the historic United States court of appeals courtroom. Within the tower, at the twenty-fifth floor, a double-height library features large ceiling beams supported by brackets painted with stenciled foliate designs. The library’s high, arched windows offer stunning views of the Manhattan skyline.