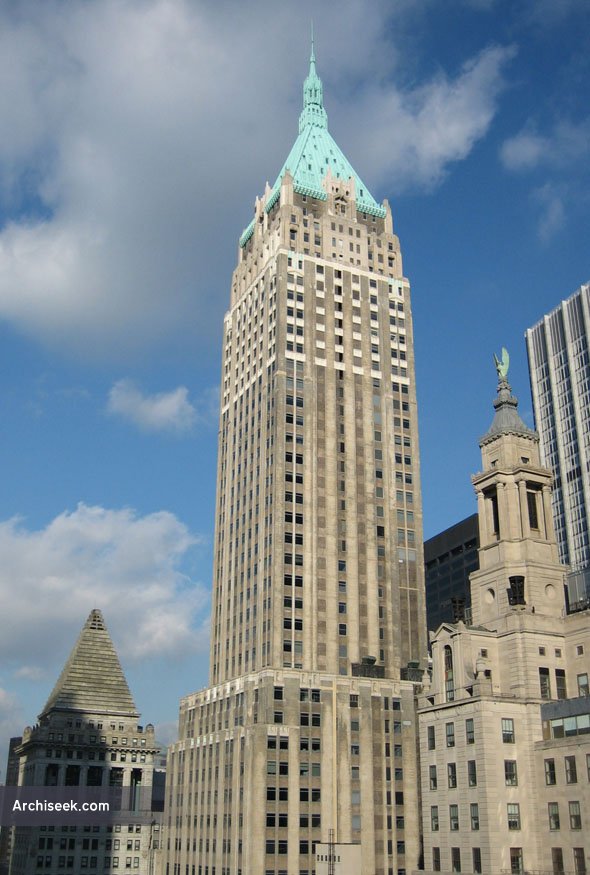 40 Wall Street is a 70-story skyscraper located in New York City. Originally known as the Bank of Manhattan Trust building, the building was designed by H. Craig Severance to be the tallest in the world. Construction of the Bank of Manhattan Building at 40 Wall Street began in 1928, with a planned height of 840 feet, making it 135 feet taller than the nearby Woolworth Building, completed in 1913. More importantly, the plans were designed to be two feet taller than the Chrysler Building, which was in an ostensible competition to be the world’s tallest building. In order to stay ahead of the race, the architects of 40 Wall Street changed their originally announced height of 840 feet, or 68 stories, to 927 feet, making their building upon completion in May 1930, the tallest in the world. H. Craig Severance has previously been a partner of Chrysler’s architect William Van Alen, a partnership that had ended acrimoniously.

Upset by Chrysler’s victory, Shreve & Lamb, consulting architects of 40 Wall Street, wrote a newspaper article claiming that their building was actually the tallest, since it contained the world’s highest usable floor. They pointed out that the observation deck in the Bank of Manhattan Building was nearly 100 feet above the top floor in the Chrysler Building, whose surpassing spire was strictly ornamental and essentially inaccessible. However, such trivialities became a moot point when the Empire State Building was completed eleven months later in 1931, becoming the world’s tallest building at 1,250 feet.