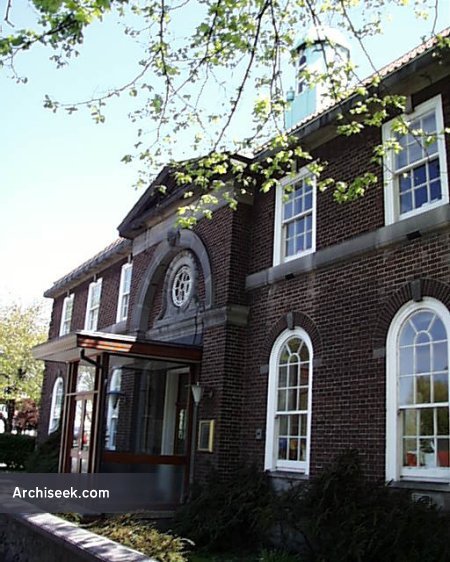 A graceful little library with a rather unfortunate porch attached. This small brick library just off Merrion Road and surrounded by RDS property has an interesting central bay. This pedimented bay has an inset arch with a round window. The curve of the arch and round window is mirrored in the three bays of round headed windows to either side. The roof has a small copper cupola.

The Library was built by the Pembroke Urban District Council (this ceased to exist in 1930 when it was incorporated into Dublin Corporation) on part of the site occupied by Pembroke Town Hall. The building was designed by architect Arnold F. Hendy of Kaye-Parry, Ross & Hendy, Kildare St Dublin, and constructed by G & T Crampton Building Contractors.

The library was funded by the Carnegie United Kingdom Trust, the last such library to be built in Ireland. The first Librarian was Irish short story writer Frank O’Connor.