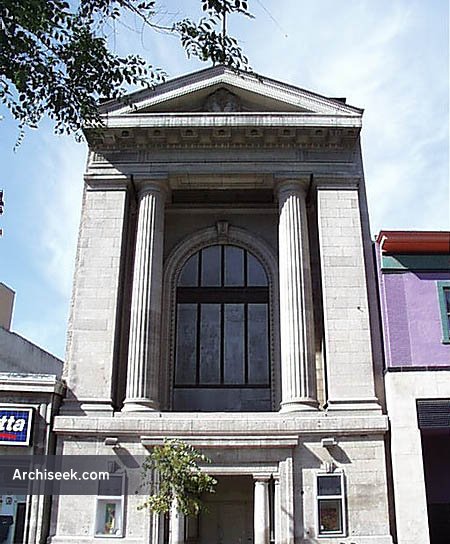 In Winnipeg the main banks had been clustered on Main Street. As Portage Avenue developed into a shopping area, the banks started to open up branches to cater for consumers. In 1920 the Bank of Commerce was amongst the first branches on the street. This structure originally was built in 1906 as the Kennedy Block (after owner C.W.N. Kennedy), a three-storey brick retail and office building with four shops at streetlevel (the block was also called the Affleck Building after its conversion to a bank). The structure was built to hold the weight of extra storeys that the owner felt would become necessary in the future. All but the facade to Portage Avenue was demolished in 2012, athough the interior had previously being gutted. The facade is now an adornment on a glass and steel mixed used building.

With conversion of a portion of the block to a bank in 1919, a new Tyndall stone façade was added as well as other structural and ornamental features. To provide increased light, a steel-trussed, double-pitched roof allowed for skylights. Bearing a close resemblance to the bank’s Main Street headquarters, the new Portage Avenue branch displayed a rusticated Tyndall stone base leading to two massive fluted Doric columns and capped by a complete entablature and highly ornamented pediment. The columns enclosed a recessed area that included the main entrance and a round-headed window. was flanked by two small, steel-framed windows, two unfluted Doric columns and a complete entablature.