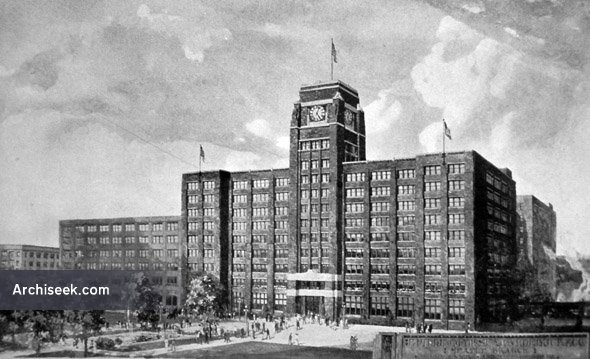 The Starbucks Center, world headquarters for Starbucks, is the second largest building in Seattle, with over 1,800,000 square feet (167,000 m2). Originally the building was the central structure in a complex built by Sears, Roebuck to fulfill the Sears Catalog in the Western U.S. After the catalog business was closed, the building was sold in 1987, and eventually redeveloped as the Sodo Center. Later, Starbucks became the building’s primary tenant and secured naming rights.

Built in 1912 by the Union Pacific Railroad to lure Sears, Roebuck & Co. to Seattle, the original building was constructed from heavy timbers from the historic Yesler Mill. Emboldened by the sale of lady’s undergarments to Alaska, Sears built an addition in 1914 which was the largest structure west of Chicago at the time of its completion. The addition totaled over 800,000 square feet. In 1925 Sears opened a retail store at the site which is currently the oldest continuously operated Sears store in the world. With building additions in 1945, 1956, 1965, 1974 and 2001, the complex may be the largest multi-tenanted building west of the Mississippi.