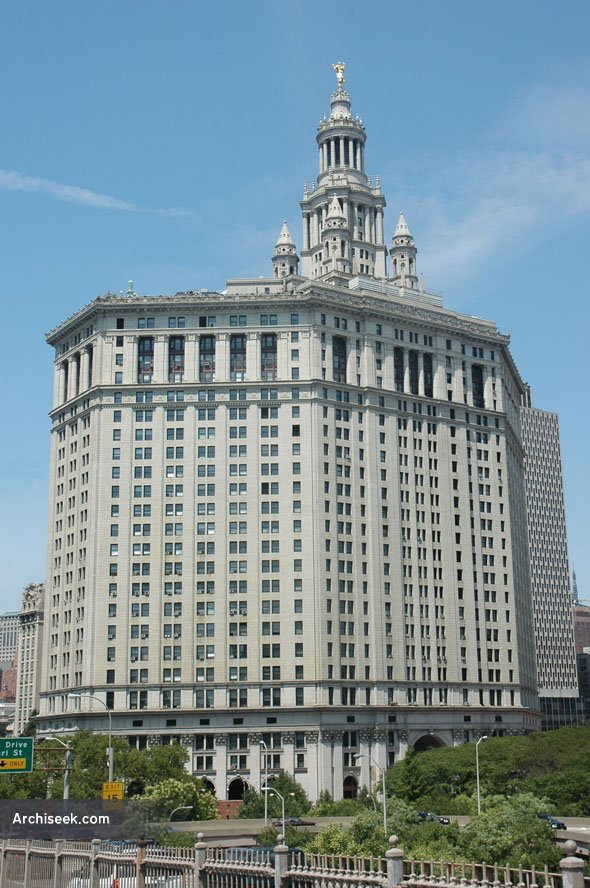 Located at the intersection of Chambers Street and Centre Street, the Municipal Building is one of the largest governmental buildings in the world. In 1888 Mayor Abraham Hewitt appointed a commission to study suitable plans and plots of land in order to bring city functions and offices under one roof, with four architectural competitions being held between that year and 1907. The final competition was held by the Commissioner of Bridges, who had already secured a new plot of land to be used for a new trolley hub at the Manhattan base of Brooklyn Bridge. Twelve architectural firms entered what would be the last version of the competition, and the winning entry was received from a young partner of McKim, Mead and White.

Construction began in 1909 and ended in 1915, marking the end of the City Beautiful movement in New York. McKim, Mead and White designed it as the first building to incorporate a New York City Subway station. Enormously influential in the civic construction of other American cities, its application of Beaux-Arts architecture served as the prototype for the Terminal Tower in Cleveland, the Fisher Building in Detroit, and the Wrigley Building in Chicago.

The statue of Civic Fame on top of the Municipal Building, installed March 1913, is a gilded figure designed by Adolph A. Weinman. Standing barefoot on a sphere, she wears a flowing dress and a crown of laurels to signify glory. In her left hand is a five-sectioned mural crown, to represent the five boroughs of New York City (Manhattan, Brooklyn, The Bronx, Queens, and Staten Island; the building’s five cupolas also represent the five boroughs). In her right hand is a shield and a laurel branch to represent victory and triumph. Weinman also sculpted the models for the bas-relief panels on the building.