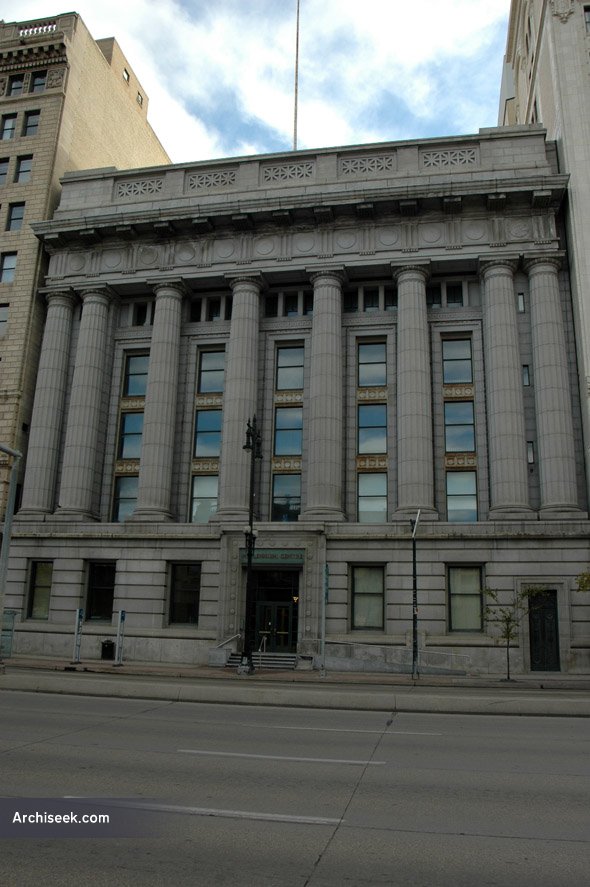 The present structure at 389 Main Street is the third Bank of Commerce Building to stand on its site. It constitutes one of Canada’s finest examples of what the Canadian Inventory of Historic Building terms Bank of Commerce style of architecture. Upon its arrival in Winnipeg in 1893, the Bank of Commerce leased space in the Bannatyne Block. A post-1896 economic upswing led to unprecedented prairie expansion. Settlers rushed to the prairies to cultivate available farmlands. Wholesalers established west of Main Street. With a change in architectural styles to classically inspired buildings, the Bank of Commerce decided to act. In 1899 this financial institution purchased and demolished the Bannatyne Block and hired Darling & Pearson to design a monumental banking structure.

Complete with its elaborate marble floor and mahogany counters, the first Darling & Pearson Bank of Commerce attracted so many customers that by 1910 it was necessary to replace it. As these same architects prepared plans for its successor, the earlier structure was carefully dismantled and re-erected in Regina.

The present building is a remarkable example of Bank of Commerce style of architecture. With its “rusticated base, monumental columnar façade and ornamental balustrade”, it constitutes a design on a grand scale imitated by lesser structures at Port Arthur, Stratford, St. Thomas, and other urban centers. The building stands out for its lavish use of costly materials. For building stone, its owners specified white Stanstead granite quarried in Quebec’s Eastern Townships. Marble walls and marble floors grace much of the main magnificent banking hall. The three storey banking hall interior is probably the grandest space in the city outside of the Provincial Legislature. In offices originally occupied by bank officials, walnut mantelpieces and exquisite fabrics adorn the walls.

Reminders that the bank served prairie interests are abundant. Shields of the Bank, Great Britain, Canada, and Manitoba are situated on the four corners of the banking room ceiling. The bronze front doors stress the banks’ association with the grain trade. On one door lies an engraving of a banker accepting grain sheaves from two merchants while immediately opposite is a depiction of banker and clients exchanging funds. A paucity of building renovations attest to the quality of the original Darling & Pearson design.