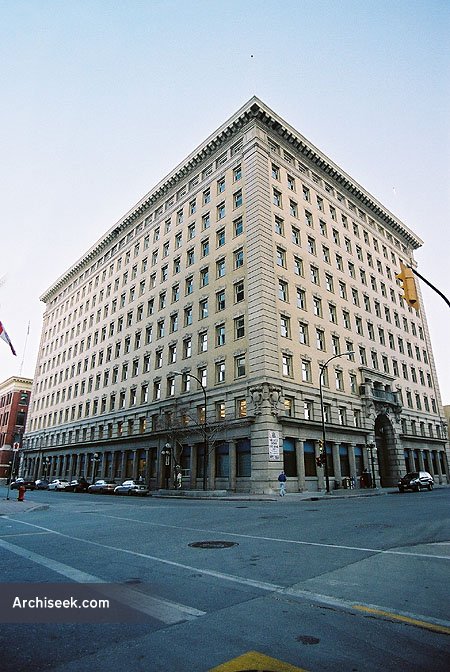 The center of commerce in The Exchange District, the Grain Exchange Building reflected the growth of Winnipeg at the turn of the century after the growth of the railroads. The original seven-storey building was designed by Canada’s foremost architects, Darling & Pearson of Toronto with subsequent additions by their Winnipeg associate, Jordan and Over. The structure features stone and terracotta details. A row of arched windows on the sixth floors shows the location of the two-storey trading room which has now been divided and houses the Chamber of Commerce. The building continues to be occupied by businesses involved in the grain industry.

The Exchange was designed in the Sullivanesque Style, a variant of the Chicago School of architecture for tall, steel-framed commercial buildings. In the case of the Grain Exchange Building, the Sullivanesque form is combined with Italian Renaissance palazzo detailing. A Bedford stone base encompasses the structure’s ground and mezzanine floors; the office mid-section (shaft) consists of solid, buff-coloured brick walls; and the capital has an attic and heavy, projecting cornice. The colossal, round-arched stone entry on the Lombard (south) facade extends up to a third-floor balcony supported by console brackets. Above the door are a large limestone lintel, with the building’s name in raised block letters, and a three-part arched transom.