1913 – The Peace Palace, The Hague, The Netherlands 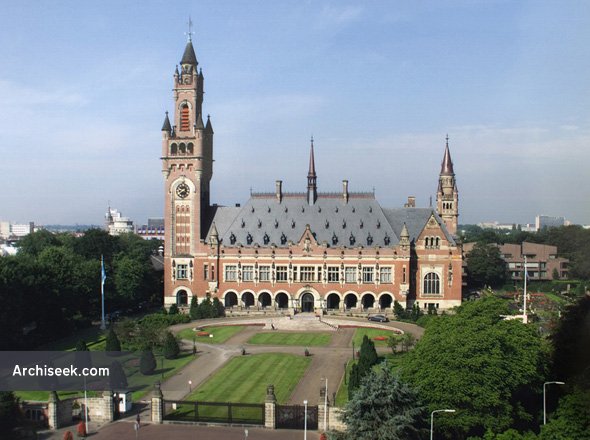 Andrew Carnegie, the wealthy industrialist, was asked in 1902 to consider sponsoring offices and a library for the Permanent Court of Arbitration. Fedor Martens, a Russian lawyer and diplomat was one of the many persons who managed to gently push Carnegie into agreeing to do so. In 1904 the Carnegie Foundation was established, donating a sum of $ 1.5 million (now at least c. $ 30 million). Carnegie expressed his wish for an open and international competition resulting in a building that was to stand alone, preferably in a park. The building should contain spacious rooms, large enough to have meetings in and be provided with a great library equipped with all the modern technical devices. In the summer of 1905 an international competition for the design was organized, which was eventually won by Louis M. Cordonnier (1854-1938) of Lille, France, from an international field of leading architects.

Cordonnier’s rather baroque design was sobered down, both in terms of aesthetics and in terms of finance, by the Dutch architect J.A.G. van der Steur. The palace as designed initially had two big bell towers in front and two small ones in the back. Only one big tower and one small tower remained in the final building. Also to save money, the separate library building from the winning design was incorporated in the Palace itself. 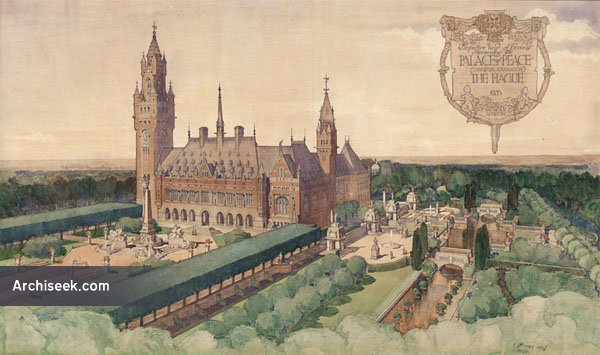 On July 30, 1907, coinciding with the Second Hague Peace Conference, the stone-laying ceremony took place. Six years later the Peace Palace and grounds, designed by the English landscape architect T.H. Mawson, were officially opened. In the presence of four-hundred guests, among whom the Dutch Royal Family, Andrew Carnegie and an international group of legal experts, politicians and pacifists.

Other institutions Originally intended to be just the home of the PCA, in 1922 the Peace Palace became home for the Permanent Court of International Justice. This Court was reinstituted after the Second World War as the International Court of Justice (ICJ). It is the principal judicial organ of the United Nations. The Court has a dual role: to settle in accordance with international law the legal disputes submitted to it by States, and to give advisory opinions on legal questions referred to it by duly authorized international organs and agencies.