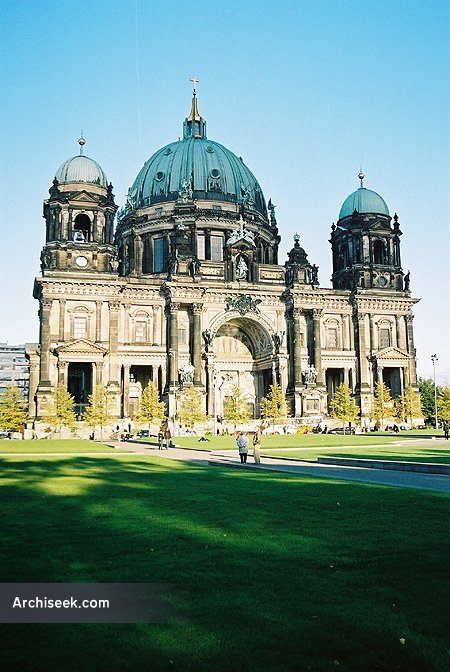 Before the construction of this massive cathedral, a smaller cathedral which was founded by Friedrich the Great and renovated by Schinkel stood on the site. Opposite one of the great palaces of Berlin, it was a very important site in the eastern part of the city close to all the major institutions and museums. In 1894 this cathedral was demolished and the new larger and more imperial cathedral (for Emperor Wilhelm II) erected in its place to the designs of Julius Carl Raschdorff, the court architect.

When completed in 1905, the cathedral as completed contained an extra chapel – the Memorial Chapel of the Hohenenzollern dynasty was torn out in 1975 leaving the cathedral with two – the main Sermon Chapel and the Baptismal and Marriage Chapel. The former Memorial Chapel was sited to the left of the main facade alongside the River Spree and was as large as the main Sermon Chapel. The cathedral was severly damaged during the war after an incendiary bomb hit the cupola. The cupola collapsed into the main body of the church and destroyed much of the interior. Although temporary repairs were carried out after the war, it wasn’t until 1975 that reconstruction work started. In 1993 the cathedral was rededicated.

After reconstruction, the cathedral is not as built. In addition to the loss of the Memorial Chapel, the central lantern is smaller, and the lanterns on the smaller towers were not reconstructed.

The exterior of the cathedral is incredibly bombastic and overscaled like many of the Imperial buildings of Wilhelm II’s reign. The overscaled main facade hides a relatively small church under a massive dome – the church seats around a congregation of about 1600. Like many Berlin buildings, upper levels are decorated with sculptural figures. The interior of the cathedral is magnificently overbearing.

The interior of the cathedral has been completely restored since 1975 after damage sustained in the Second World War. The photograph to the left shows the Emperor’s Staircase which was completed in 1989. The rear altarpiece of the main Sermon Chapel is on the right.

Directly opposite the chancel was the gallery for the Emperor and his family (above right). The organ was designed by the architect’s son Otto and was built by celebrated organ builder W.Sauer from Frankfurt. It has over 7000 pipes and is one of the biggest organs in Europe.