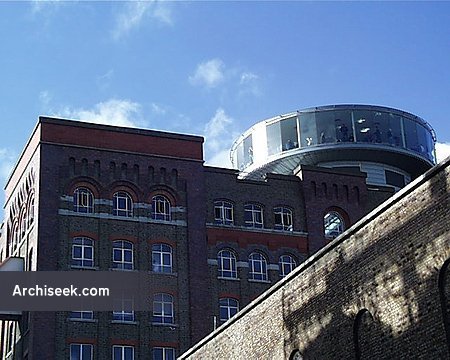 Now known as the Storehouse (the Guinness Visitor Centre), for many years this building was under threat of demolition, lying empty and disused. Ironically, only the cost of demolition saved it. The building is reputedly the earliest steel framed multi-storey building in Britain and Ireland and is a magnificent structure with massive brickwork and detailing. It was built in 1904 as the Fermentation House for the brewery. In plan the building was almost square with the steel structure allowing light wells to illuminate the ground floor. Unusually for a steel framed building, the steelwork is exposed, neither clad in concrete as was the norm in Europe or in terracotta or plaster as was the norm in similar Chicago buildings. This structure can be seen in the photographs of the interior.

The building was designed to be extended, in the left hand photograph above the unadorned wall was probably designed to be removed to allow the building to be doubled in size. This would have left the building with four great corner ‘bastions’ giving it a vast fortress like feel. Perched on top is the new Gravity Bar by RKD Architects which has floor to ceiling glazing almost the entire way around and a magnificent view of the city.

At lower levels, the detailing is massive, like the large bay window near the entrance. With the renovation of the building into the visitor centre, a small doorway is used as the entrance, up a small escalator into the massive internal space.

The interior of the Storehouse (as it is now known) is impressive. The sheer scale of the original buildings engineering has been enhanced by the renovations. During this a new atrium, shaped like a pint glass was cut through the floors of the building leaving the original steelwork exposed. This space erupts through the roof to the new Gravity Bar perched on top of the building. The space is crisscrossed by escalators to take visitors to the next level. The Gravity Bar (above) has fabulous un-interupted views of Dublin.

The image to the left shows the Gravity Bar seen from inside the building, while the image to the right shows one of the two original lightwells in the building. The interior of the building was finished in white glazed bricks and these bricks were also used on the undersides of the floors which where constructed on concrete jackarches clad with the bricks.