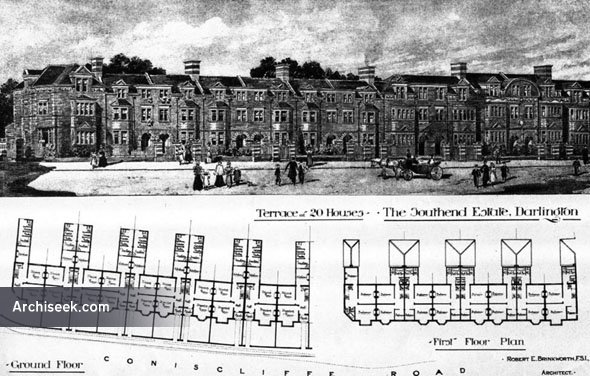 “This terrace of houses, of which we give a view with plans, is about to be commenced, and the undertaking forms part of a scheme for the laying out and development of a considerable building estate by the Darlington South-end Estate Company, the owners. The architect, Mr. Robert E. Brinkworth, of Chippenham, was the author of the design chosen in the competition, which was instituted by the proprietors about two years ago. This terrace faces Conisclifte-road, and the general facade assumes somewhat the form of a crescent, in the centre of which a semi- circular gable makes a feature, and the bays are square to give distinction to the middle blocks. The arrangement of the interior may be seen from the two floors. The sanitary arrangements are situated at the rear. Stone and red brick are to be used for the walling, and slates for the roof coverings.” Published in The Building News, August 11th 1899. Perspective Views from Road including plans.