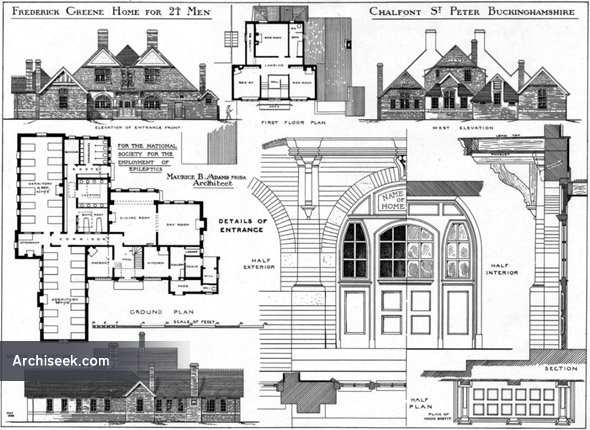 The Frederick Greene Home for 21 Men – for the National Society of Employment for Epileptics. Elevations, section & plans published in The Building News, July 29th 1898.

“This additional home for men is being erected for tho accommodation of 21 men on a site adjoining the Passmore Edwards’ Home, at the cost of Mr. Richard Dreone, one of the active friends of the National Society for the employment of epileptics. In general character this building will harmonise with the five others which the donor of the colony itself, Mr. Passmore Edwards, has given for the housing of epileptics at Chalfont. The plans accompanying the sheet of working details printed herewith sufficiently show the arrangement of the building, which has been contrived with strict regard to economy. Te maximum amount of sunshine is secured for the patients, and the domestic part of the house is isolated completely from the patients’ rooms. The kitchen is used only for the preparation of minor meals, as a central general kitchen will in all cases furnish the cooking for dinners, kc. Red bricks and tiles are used, with rough-cast gables and stone sparingly introduced, as shown. Mr. George Darlington is the builder, and Mr. Maurice B. Adams, F.R.I.B.A., is the architect. “