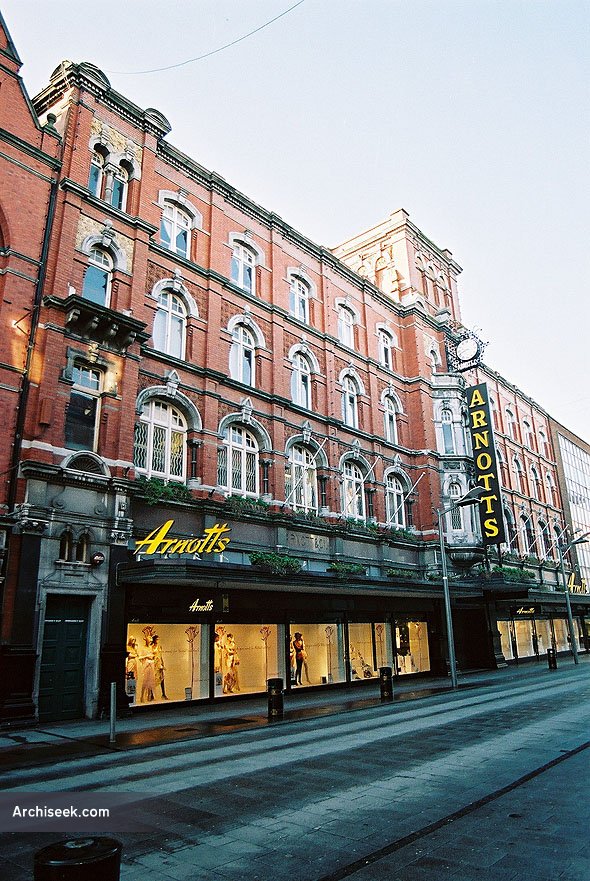 Ireland’s largest single department store, a grandiose Victorian design, the building has suffered greatly through fire, partial demolition and unsuitable extensions. One of the two great architectural landmarks of Henry and Mary Street, the other being the former Todd, Burns & Co. store, now Penny’s.

It seems that the original block which stretched from Princes Street to Henry Street was completely destroyed in 1894 after a fire. A description published in 1875: “The premises now erecting for Messrs. Arnott and Co., in Henry-street, will contain besides the front and back shops (the latter of which will be used as a luncheon saloon), two large dining and refreshment rooms for ladies, with dressing-rooms, lavatories, &c., off same. There is also a dining-room for ladies and gentlemen, 27ft. long and about 20ft. wide. The basement contains kitchens, bake-house, scullery, wine-cellar, larders, &c., &c. The front elevation is of red brick with limestone balcony and Portland stone strings &c. The spandrils formed by the front will be filled in with encaustic tiles. The fixtures, counters, &c., in shop and dining-rooms will be of pitch pine and yellow pine with American walnut in a few places. The whole is intended to be French polished. Mr. Geo. P. Beater, Sackville-street, is the architect, and Mr. P. Brodigan, Grantham-street, the contractor.”

The replacement was designed by G.P Beater in 1894, and extended in 1904. As completed, it does not match Beater’s original concept which had two central towers and a longer facade. The top of the tower was removed in 1949. And a further curtain-walled extension added in the early 1960s.