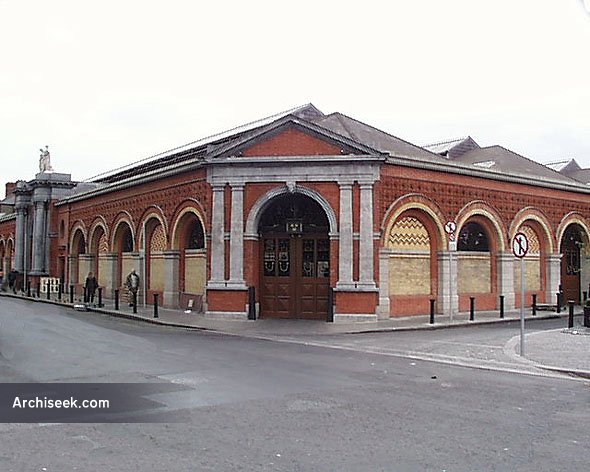 Still Dublin’s Fruit Markets and best observed early in the day when they are still invigorated by the hustle of business, the building consists of elegant victorian steelwork masked behind ornately decorated façades. 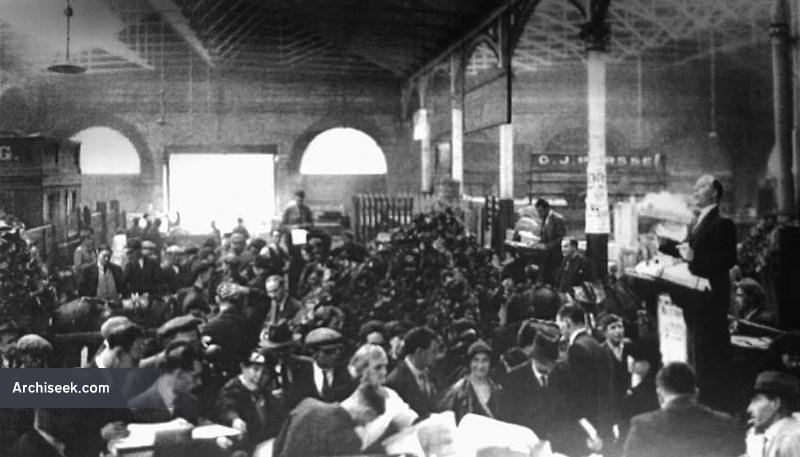 The building is decorated with representations of the goods being sold within – clumps of onions and other fruit and vegetables are surrounded by terracotta detailing. The sculptures around the granite entrance archways are by Charles Harrison. “Over the principal entrance to the New Fish and Vegetable Markets and facing Mary’s lane is placed a fine piece of statuary showing the City Arms on a shield, supported on either sides by female figures representing Justice and Commerce, with the motto on the ribbon at foot OBEDIENTIA CIVIUM URBIs FELICITAs. The work was executed by Messrs Harrison and Sons, Great Brunswick street.” The Irish Builder, April 1 1894.

The whole ensemble of polychromic brickwork, ornate wrought iron grilles and sculptures gives the markets a ornateness and cheerfulness that is missing in many of the similar purpose but more recent buildings that surround it.

“THE foundations of the new fish and vegetable market are being laid on the site for the building between East Arran-street and Fisher’s-lane. The contractors are Messrs. Thomas Connolly and Son, of Dominick street, who have been pushing on the work vigorously. The market will form a parallelogram 330 ft. long and 295 ft. broad. There will be six entrances, and the passages leading through the market will be broad and spacious. The ventilation provided will be ample, without, it is to be hoped, draught.

The front will be of bright coloured bricks, with ornamental dressings. One of the greatest improvements that could be made in the locality will be the construction of the new street from Arran-quay to the market, which will necessitate the widening of Fisher’s-lane and a number of smaller passages that abut from it. The opening up of the district by the new street will be a very decided change for the better, and will confer great advantages upon the residents. The amount of the contract is £19,000, which has been procured as a loan from the Government by the Corporation.” The Irish Builder, April 1, 1891.