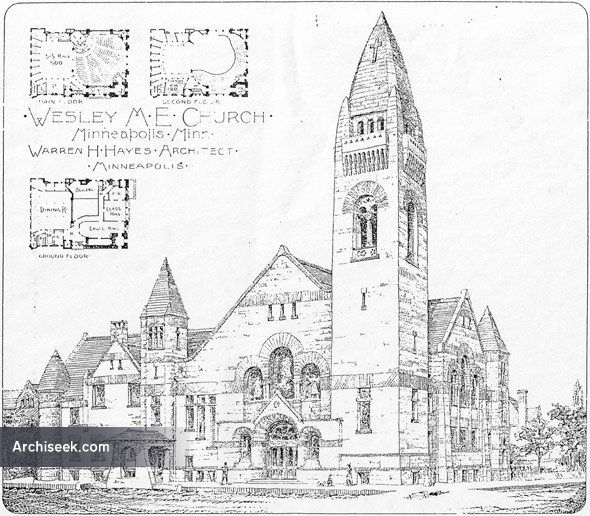 Published in American Architect and Building, May 7, 1892. ï»¿During the 1880s the city of Minneapolis enjoyed a building boom that saw the construction of numerous new ecclesiastical buildings. When membership of Centenary Methodist Episcopal Church outgrew its building at 1st Avenue S and 7th Street, the congregation looked to build a grand new church at a site on Grant Street. Commissioning the region’s premier ecclesiastic architect, Warren Howard Hayes, the congregation was rewarded with his most elaborate diagonal plan. Decorative motifs on the exterior are of two types: they either reflect structure by emphasizing lintels and arches or recall Byzantine architecture with foliated flourishes at the tops of arches, towers, and gables. The nave, warmed by colored light from surrounding windows and a graceful dome of stained glass, is both grand and intimate. The Wesley Methodist Church has survived largely unaltered since its completion more than a century ago.