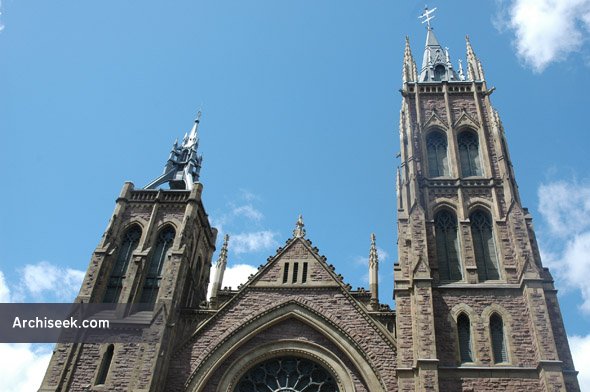 The present building is the congregation’s fourth home. It was built between 1887 and 1889 after the congregation decided to move uptown from St. James Street, hence the name. At the time of construction, it was the largest Methodist church in Canada with seating for more than 2,000. The exterior of the church is a Victorian neo-gothic image of a medieval French cathedral. The interior is designed in “the Akron style” popular with North American Presbyterians, Baptists and Methodists in the late 19th century but unique in Montreal. Central to the sanctuary are the pulpit and communion table which are located directly in front of the choir loft and organ.

In 1927, to cover upkeep costs, the church permitted a commercial building to be built in front of its Sainte Catherine Street façade. The building, adjoining the church’s structure, concealed the church for over 78 years, the church itself being announced by a large neon sign. As part of an $8-million restoration effort sponsored by the city of Montreal and the Quebec government, a portion of the commercial buildings was demolished in 2005, revealing the church once more, with a new square designed by Claude Cormier.