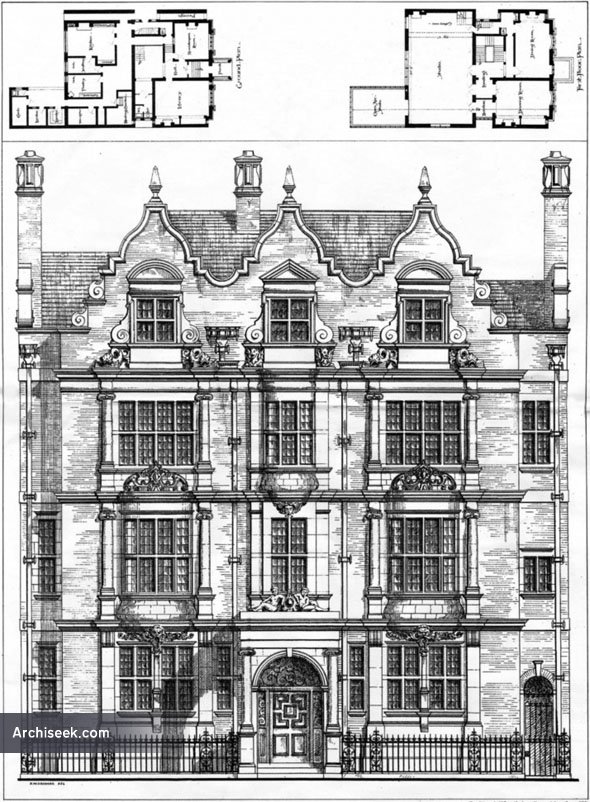 Front Elevation including plans as published in The Building News, July 23rd 1886.

This eclectic neo-Jacobean façade, in red Fareham brick and Portland stone, contrasted sharply with the stodgier work next door. Champneys’ design, published in 1886, differed from his other houses of this date, which were more ‘Queen Anne’ in style, and perhaps reflected the tastes of the owner. The front elevation was enlivened by shaped gables, oriel windows and, appropriately for a client who had trained as a sculptor under Rodin, a mass of exuberant stone carving (although not all that shown in the published engraving was executed).

Planned for a wealthy bachelor with overweening artistic and social pretensions, No. 70 was dominated by an enormous galleried studio occupying half the first floor and presumably needed for entertainment as much as for work. There was a smaller ‘open-air’ studio, or glasshouse, at the back (to the north), and a dining-room and a drawing-room at the front. Oak was extensively used, for floors, ceilings, panelling and other fittings, and there were various painted decorations, by the artist owner himself. A painted panel which he exhibited at the Royal Academy in 1892 was probably created for the house. Intended as a frieze to go above oak panelling, it formed part of a decorative scheme on the theme of ‘The Three Ages’, and depicted ‘Youth, the Toilers and the Idlers’.

The artist took up residence in 1885 and remained there until c. 1909. His successor, Ernest George Hawkings, converted the ground-floor front rooms to a full-sized billiardroom and a morning room. By 1931, when the house was offered for sale at auction, the studio had become a ballroom – ‘probably one of the most beautiful Ball Rooms in London’ – with an organ in the gallery. No. 70 was demolished c. 1936, along with the western section of Ennismore Gardens Mews North.