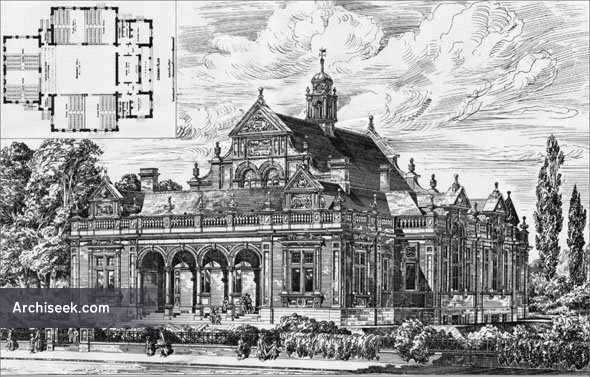 Now a ruin, and one of the last vestiges of the vast Ferguslie Threads Works in Paisley. Contemporary descriptions of the newly-built school described it as “an exquisite building which will delight the visitor whether he be an educational or architectural expert, for neither pains nor money were spared during its construction”. It was also described as “an admirably equipped school” and as “a model of beauty and appropriateness”.

The school could accommodate 400 young girls, all in employ of the company and all educated to government approved standards. The young female workers would attend this school and work in the mills on alternate days, hence the name “Half-time”. The school was innovative for its time. It boasted well-lit classrooms on the ground floor, with adjacent cloakrooms and toilets. The mill girls were given lessons mainly in the three “Rs”. Nourishing meals were prepared for them in the basement kitchen. A gallery overlooking the ground floor enabled the viewer or visitor to see concerts, plays and recitations performed by the pupils.