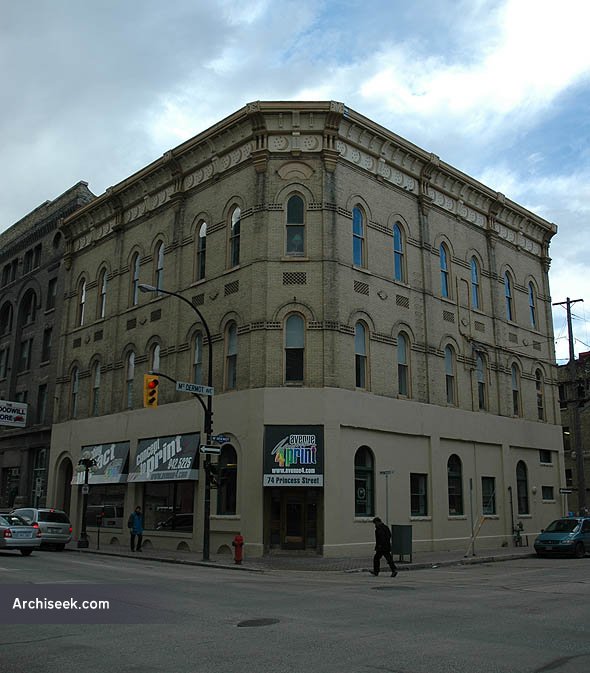 The Independent Order of Odd Fellows (I.O.O.F.) is a fraternal organization derived from English Odd Fellows orders of the mid-1700s. The Independent Order of Oddfellows constructed this three-storey structure as a clubhouse. The meeting hall for the Oddfellows, was located on the third floor. The IOOF’s interior space included clubrooms and a large, free-span auditorium complete with musician’s gallery and ballroom dance floor. Its walls and ceiling are completely covered in embossed tin. The metal cornice on the exterior includes the initials IOOF and ML No.1 (Manitoba Lodge No. 1) together with the cryptic symbols of the mystic order – a crescent moon with seven stars and a three-link chain.

The building cost $25 000 to construct, a hefty sum in 1883. The original ground floor featured large storefront windows with tow entrances located as they are now. Tall roundheaded windows on the second floor feature radiating brick heads and wood sills. In order to identify that the third floor as space for Odd Fellows, tall windows with Gothic heads are used to signify the medieval roots of the fraternal order along with an eye-brow mould and the triple links.

From its completion in 1884 to the opening of the I. O. O. F. Temple on Kennedy Street in 1910, this building served as the headquarters for Odd Fellowship in Manitoba. A major fire in January 1930 destroyed many of their records and regalia, and gutted much of the interior of the building.

Because the Odd Fellows used only the third floor of their building, the lower two floors and basement have always been occupied by commercial tenants.