1882 – Design Competition for Church of the Savior on Spilled Blood, St. Petersburg, Russia 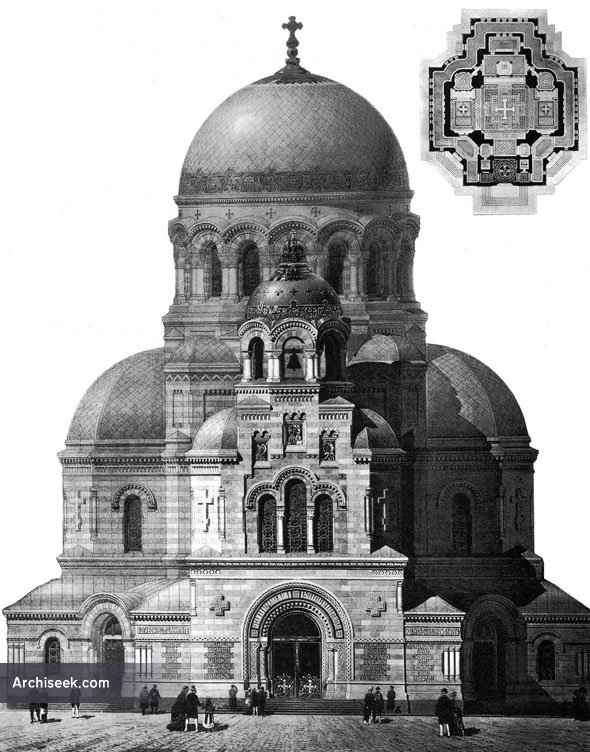 This marvelous Russian-style church was built on the spot where Emperor Alexander II was assassinated in March 1881 by a group of revolutionaries, who threw a bomb at his royal carriage. The decision was taken to build a church on the spot where the Emperor was mortally wounded, and an architectural competition was held. The church was built between 1883 and 1907 and was officially called the Resurrection of Christ Church. The construction of the church was almost entirely funded by the Imperial family and thousands of private donators. Both the interior and exterior of the church is decorated with incredibly detailed mosaics, designed and created by the most prominent Russian artists of the day (V.M. Vasnetsov, M.V. Nesterov and M.A. Vrubel). Interestingly, despite the church’s very obviously Russian aspect, its principle architect, Alfred Alexandrovich Parland, was not even Russian by birth, nor the winner of the competition. The design harks back to medieval Russian architecture in the spirit of romantic nationalism.

The church was closed for services in the 1930s, when the Bolsheviks went on an offensive against religion and destroyed churches all over the country. It remained closed and under restoration for over 30 years and was finally re-opened in 1997 in all its dazzling former glory.