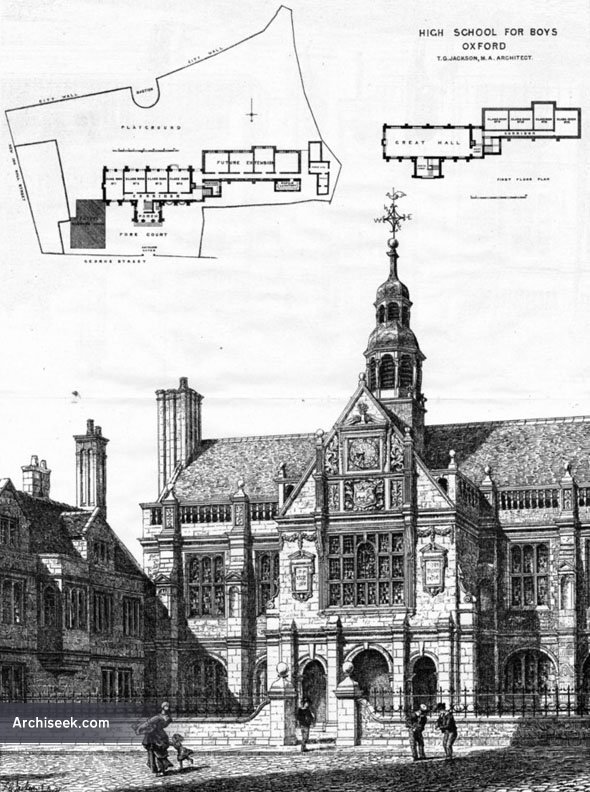 Illustration published in The Building News, June 13th 1880. The Oxford Chronicle for 11 October 1879 gives the following full description of the proposed school: “This building, which is about to be built from the designs of Mr T.G. Jackson, will occupy the vacant plot of ground behind the houses on the south side of George Street, and between that street and Bulwarks Alley, the remains of the old city wall and New-Inn-Hall-Street. There will be a frontage in George Street of about 120 ft., which will be recessed to form a fore-court behind, and this will be the principal block of the building, occupying the whole width of the frontage, containing four class rooms below, a larger hall above (84 ft. by 28 ft.), and a projecting building in front, containing the principal staircase and entrance porch, with a decorated gable and a lantern above. There will be a second staircase at the west end of the hall, with an entrance from the south. For the present the building will not be carried beyond this point, but according to the alternate plan a long wing, containing class rooms and corridors, will extend westwards, behind and below to the houses in George Street. By this arrangement of the building a large extent of ground is left vacant for a playground between the school buildings and the old city wall, with an entrance from New-Inn-Hall Street and another from Bulwarks Alley. The plan, when completed, will include a house for the Head Master, and possible new science and art schools may be built on the part of the site, for the use both of the High School and of the townspeople generally.”

The architectural competition to design the school was won by T.G. Jackson, but the architect of the second premiated design, Frederick Codd, considered that much of his design had in fact been incorporated into the school. The school eventually cost £10,000, and opened in 1881 with 47 pupils. The school remained here until 1966, when it moved to the Southfield Grammar School site (present called Oxford Community School) in Glanville Road off the Cowley Road. The George Street building for some years housed the Classics Department of Oxford University, but was transferred to the History Faculty in the summer of 2007.