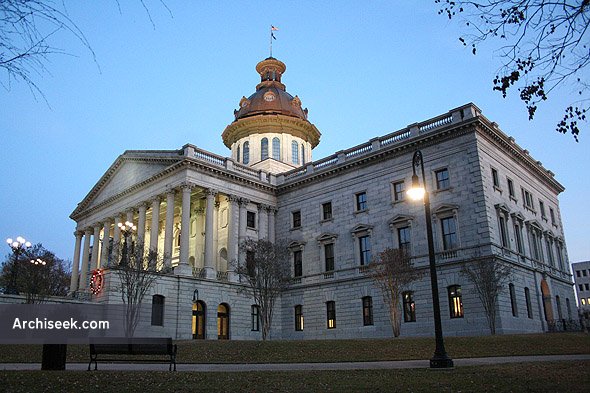 Construction originally began in 1851, but the original architect was dismissed for fraud and dereliction of duty. Shortly afterwards, the structure was largely dismantled because of defective materials and workmanship. Work on the John R. Niernsee designed structure began in 1855, slowed during the Civil War, and was suspended in 1865 as Sherman’s Union Army entered Columbia on February 17. Although several public buildings were “put to the torch” when United States troops entered the city, the capitol building was not.

The structure was damaged by artillery and smoke from the burning of adjacent structures. The building’s main structure was finally completed in 1875. From 1888 to 1891, Niernsee’s son, Frank McHenry Niernsee, served as architect and much of the interior work was completed. In 1900 Frank Pierce Milburn took over as architect, but was replaced in 1905 by Charles Coker Wilson who finally finished the exterior in 1907.