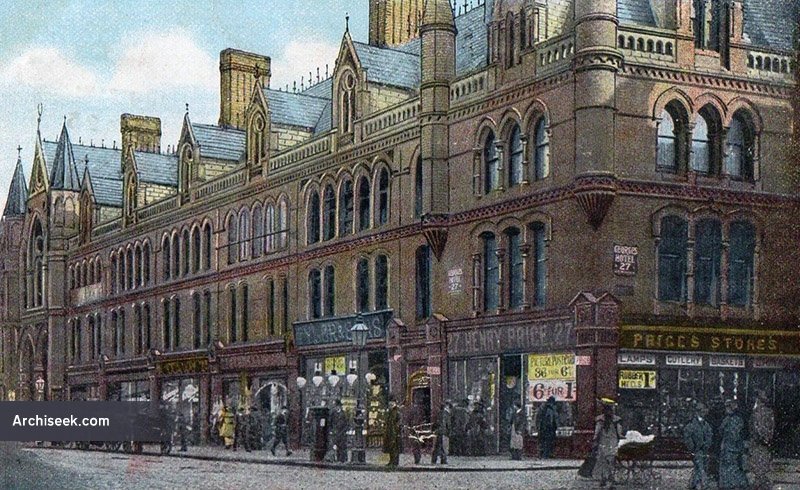 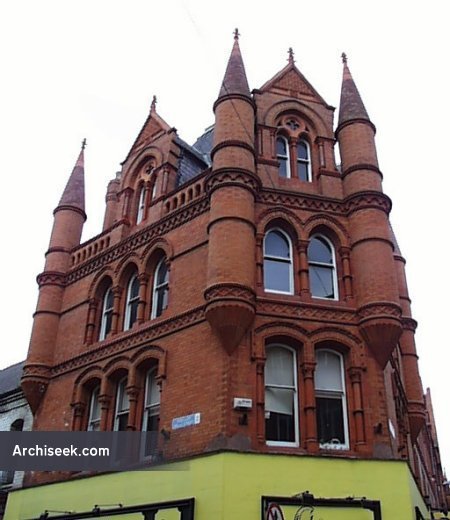 South City Markets takes up an entire block of the city and is surrounded on all side by a network of small busy commercial streets. The building is heavily ornate with much decoration in terracotta and red brick, and originally contained a large glass covered market place. Described in The Building News: “At the meeting of the directors of the Dublin South City Markets Company, on Thursday in last week, a report was read showing that steady work is being made with the erection of these buildings. The contract is being carried out by Mr. John Hall Thorp, of Leeds, who took it at £01, .500, and a separate contract has been made with Messrs. Johnson and Co., of Keymer Junction. Sussex, for terra-cotta work at £2,034. Of the ring of houses surrounding the central hall, those fronting Exchequer-street are to be opened on May 1st, 1880, those next George-street, which are of the highest class, on July 1st, 1880, and the entire structure, including market hall, shops, aud cellars, is to be completed by the 1st of March, 1881”

After a serious fire in 1892, the glass market place was destroyed and replaced by a cruciform plan containing intersecting arcades. The adaption was handled by W.H. Byrne and he was also responsible for removing the central tower & spire and the corner spires from the Georges Street facade. The Irish Builder reported, on September 15 1894, that “these buildings were reopened on Thursday last by the Lord Mayor Dillon. In their present new and much-improved style of planning and laying out, it is probable that more extended patronage than before will be given to the traders have become tenants to the company. It would be very desirable now that such fine premises have being provided that a large number of traders in the meat and vegtable lines would exhibit and dispose of their stock within this market.”

At the same time Byrne designed several blocks of shops in streets behind the complex with shop fronts modeled on the Markets facades. The interior has since been remodeled when one of the arcades being incorporated into a sausage factory and an old department store. The original entry arches can still be seen on the building exterior, with the southern end remaining open providing entrance to the factory. The remaining arcade gives a good impression of the original intention. The arcade is top lit by glazed panels in the roof and by clerestory windows. The complex also has a huge columned and vaulted basement which is accessible as a public carpark. The building came under threat in the 1970s but has now been reprieved and has gained a new lease of life as the market has become a busy pedestrian route.

There are many fine details in the arcades including the small arched doorways at either end of the pedestrian route, and the decorative ironwork supporting the building above.

In recent years work has been done restoring and cleaning the facades.