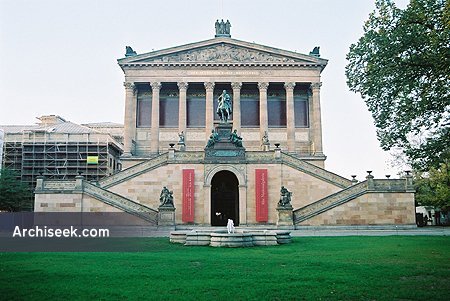 Part of the Museumsinsel complex of galleries and museums, the Nationalgalerie is surrounded by a long colonnade of Doric columns. The building itself takes the form of a Roman temple on a two storey plinth accessed by two large flights of steps. The large statue is of King Friedrich Wilhelm IV by Alexander Calandrelli. Along with other buildings on the Museumsinsel, it was badly damaged during the war but has now been largely restored. From the opposite bank of the river, the temple allusions are more obvious with the large stone walls un-punctured by windows or other openings.