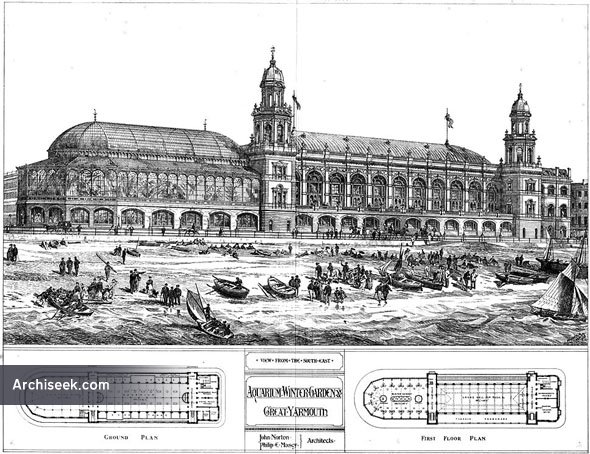 A monumental structure designed by John Norton and Philip E. Masey of London in 1875. The plan for the main part of the building showed a grand hall, 194 ft in length with an aquarium beneath, and was in Italian Renaissance style; attached to its southern end was a winter garden 136 ft long, sited over a skating rink. The grand hall was marked by twin towers with cupolas, while the winter garden was in classical conservatory style, albeit on a large scale. The foundation stone for this massive undertaking was laid in 1875 by Lord Suffield, and the contractors were Aldin & Sons of Kensington.

Construction of the winter garden section never began as the moneyt ran out , and only a much modified version of the grand hall and aquarium reached partial completion. The Aquarium, as it was known, opened in 1876 but was a failure, despite visits from the Prince of Wales in 1881 and 1882, after which it took the title Royal Aquarium. It closed in September 1882 and was sold, the new owners rebuilding the main section as a theatre to the design of local architects Bottle and Olley.