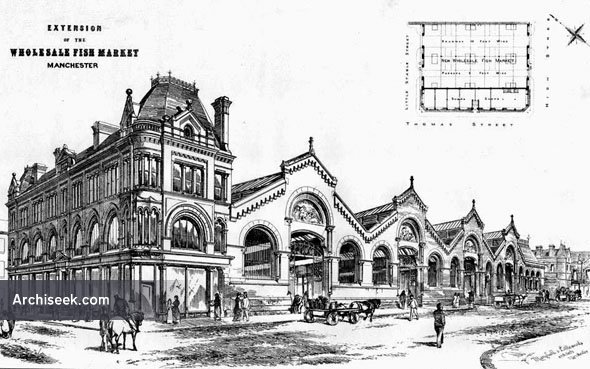 Manchester Corporation decided in the early 1870s to replace the city’s main fish market in Strangeways with a new one located near Shudehill, close to the city’s other main markets. It was a decision not welcomed by all parts of the fish trade. Designed by the local architects, Speakman, Son and Hickson, the wholesale market incorporated the latest features including large cellars and ice stores. A small part of the building’s £42,000 cost was spent on architectural sculpture in the form of stone panels depicting scenes from the working life of fishermen. Six panels were placed above the principal arched entrances, four on the principal facade on (Upper) High Street and two on the Salmon Street side of the market. They were the work of Joseph Bonehill of Manchester. The new wholesale and a smaller retail fish market were opened by the Mayor of Manchester, William Booth on St. Valentine’s Day, 1873. Some six years later the wholesale market was extended by Mangnall & Littlewood . The wholesale market remained an important part of Manchester’s cental market system until 1973, when Smithfield Wholesale Market was re-located to a purpose built complex in Openshaw. There was some concern over the fate of the panels though the idea of removing them to the new fish market was not realised. In 1977 the building was finally closed and in the following years the roof and some of the walls were removed but not the sculptural panels. In 1987 the fish market was included in the newly created Smithfield Conservation Area. The building is now but a shell – with internal blocks that house upmarket apartments.