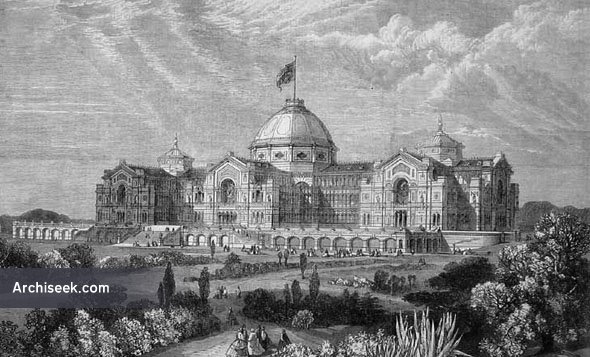 Built as “The People’s Palace” in 1873, Alexandra Palace provided the Victorians with a great environment and recreation centre, but just sixteen days after its opening, the Palace, which had already attracted over 120,000 visitors, was destroyed by a fire in the dome. On 1st May 1875, less than 2 years after the destruction of the original building, a new Palace opened rebuilt by the same team. Covering 7 acres, it was centred on the Great Hall, home to the mighty Willis Organ which was driven by two steam engines and vast bellows.

The scale of the enterprise was enormous. The Great Hall alone, with a roof covering 8000 square metres, was built for a total capacity of 14,000 people “” 12,000 in the audience, and 2000 in the orchestra area (to accommodate the kind of massed choirs performing at the Crystal Palace’s Handel Festivals, perhaps). Its organ was crafted by Henry Willis, who also produced the organ for the Royal Albert Hall; with 8,000 pipes, it was then the largest in the country. It is still in use, and is being restored piecemeal by the same family firm. The Palace’s vast Victorian auditorium was originally built to seat up to 3,500 people.

In 1935, the BBC leased the eastern part of the building from which the first public television transmissions were made in 1936. Alexandra Palace was the main transmitting centre for the BBC until 1956, when it was used exclusively for news broadcasts.

Just six months after the transfer of trusteeship to Haringey Council, on 10th July 1980, the Palace caught fire for the second time. An area comprising the Great Hall, Banqueting Suite, and former roller rink together with the theatre dressing rooms was completely destroyed. Only Palm Court and the area occupied by the BBC escaped damage. Development and restoration work began soon after and the Palace was re-opened on 17th March 1988. It continues as a Charitable Trust administered by the London Borough of Haringey.