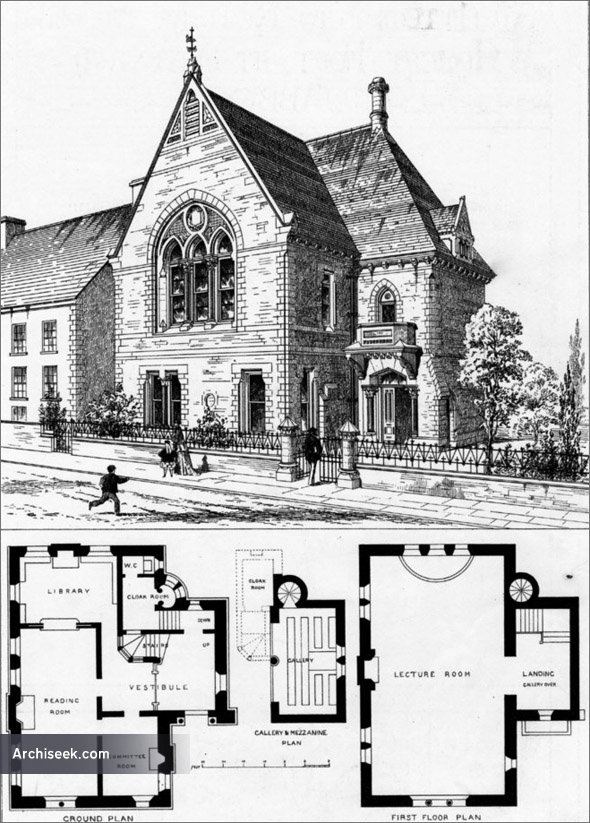 Perspective View & Plans published in The Building News, December 4th 1870. “THIS building was opened on Thursday, the 15th of October. It has been built by a charitable lady, Mrs. Matilda Jones, of Ancre-hill, near the town, who has also endowed it for the free use of the working men of Monmonth under the care of trustees. The plan is a parallelogram 52ft, Gin. by 32ft. Cin , with a transeptal wing 2Sft. by 15ft. on the south side. It has two stories. The ground floor is 12ft. high, Comprising a spacious entrance vestibule, and hall, with mosaic floor, from which an inner vestibule is enter d through an ornamental glazed wood screen with self-acting folding doors.

From this inner vestibule the following rooms are entered :— The reading and news room, 32ft. by 15ft., which is lighted in front by a coupled window, and iu the side by two windows of a similar character ; the library, 20ft by 13ft. 6in ; committee room, 14ft by 12ft., which can also be entered from the reading room.

From the outer vestibule stone stairs, 6ft. wide, with ornamental balustrade of hammered wrought-iron, lead to the lecture hall, 48ft. by 2Sft. and 20ft high. Midway on the south side, and above the doorway, is a pointed arcade of two openings to a gallery over the landing and staircase, which is approached by a circular stairs from a cloak-room forming a mezzanine story on the first landing of stairs. Beneath the mezzanine, and approached It is a few steps from the outer vestibule, are a lavatory room, urinals, and watercloset, and on the basement are a boiler room for tea purposes, cellars for coal stores, &c.

The general style of the edifice is of Italian Gothic character. The exterior is constructed with polled red sandstone walls and Bath stone dressings and strings, interspersed with blue forest stone bands ; the shafts of the columns of entrance doorway and windows also being of blue forest stone polished.

The noticeable features are the lofty gabled front, 54ft, high, surmounted by a banneret of hammered iron, coloured and gilt with crystal points. In the centre of the gable is the large pointed window of the lecture hall. This window is subarcuated as a triplet on circular columns with flutted capitals, the spandrel being filled in with the arms of the founder, surrounded by diaper and foliations of a conventional character. The entrance doorway, fi inked with moulded jambs and circular columns with foliated capitals and moulded bases, is finished above with a bold octagonal balcony carried on massive moulded brackets and corbels with pierced spandrels. The architect was Mr, B. Lawrence, of Newport. The contractors were Mr, C. Lawrence, jun,, Mr. George Webb, and Mr. H. Elias. The cast-iron work was supplied by Messrs. Macfarlane, of Glasgow, and the hammered iron work by Cormell, of Cheltenham. The carving is by Mr. J. Willis. “