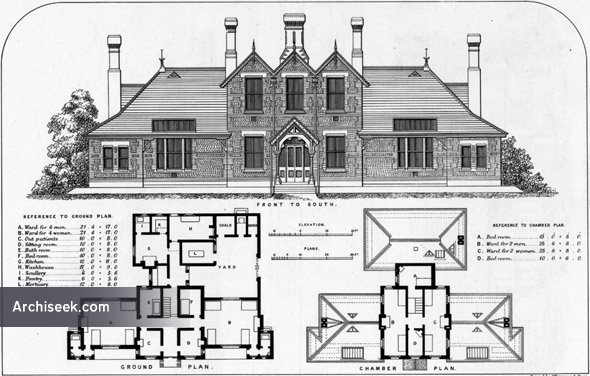 Front Elevation & Plan with key published in The Building News, October 21st 1870. “THE hospital, an illustration of which we give, is being built by Colonel Clifton, the lord of the manor. It comprises on the ground floor a ward for four men, and a similar ward for four women, respectively placed to the right and to the left of a central block of building containing, likewise on the ground floor, tlie chief entrance and the staircase, two rooms for the housekeeper or nurse, an out-patients’ room, and a bath-room. Attached to each of the wards on the ground-floor, in a projecting building, is an earth closet entered from a lobby, in which is placed a siok for water supply, &c., and from the lobby access is given to a covered way or verandah, formed in the recesses between the projecting buildings containing the closets, &c., and the central block of building. These verandahs are on the south side of the building and overlook the beach. The central building only is two stories high, and on the upper floor comprises two wards, each for two beds, to the right and left of the staircase respectively, one ward being for men, the other for women, with an attendant’s room between them. An additional bedroom is also provided, approached from the stairs landing ; this room is over a projecting building at the back of the central block, and is intended to be used when required as a ward for highly infectious cases. Each ward will have fresh air admitted by gratings near the floor level, under control, and an opening in the ceiling for exit of vitiated air will be provided, in addition to which in each chimney breast a ventilating flue will be formed. All the wards and rooms will be warmed by open fireplaces. At the back of the hospital proper are a surgery, a side entrance door and vestibule, a kitchen, scullery, pantry, and washhouse, and entered from the enclosed yard is a mortuary, with some other conveniences. The building is being erected of brick quoins, and other dressings to opening, faced in panels with cobble stones, picked off the beach at Lytham. Bands of blue bricks are introduced, and the heads and sills to the windows and doors are of stone. The roofs will have eaves projecting considerably, and the gables will have cut vergeboards. A timber-framed porch will serve to protect the front entrance door. The general arrangement of the building was devised by Dr. Holland, of Prestwich; the architect is Mr. Henry Littler, of Manchester. The first stone of the hospital was laid on the 2nd Sept. by Miss Constantia Wood, niece of Mrs. Clifton, on which occasion Mr. Fair, Colonel Clifton’s agent, presented a handsome silver trowel to the lady who kindly undertook to perform the ceremony. “