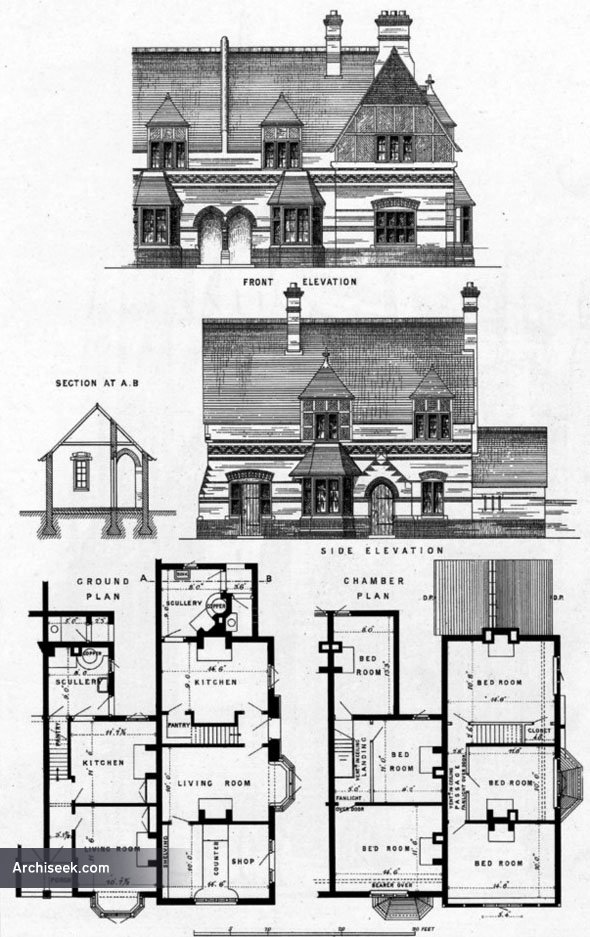 Elevations & Plans published in The Building News, February 4th 1870. “These cottages are being built on land belonging to S. John’s College, Oxford, let on lease for a term of 99 years. Tlio site forms a portion of the ground which wast intended for the artisans’ houses in connection with the Great Western Works, at the time of the negotiation for the establishment of these works in Oxford. The facework of the cottago-s is built with red and white nine-inch brickwork, as indicated by the elevations, and with half timber framing tilled in wholly with red bricks in cement. The roofs are covered with Staffordshire brindio tiles, and red ridge tiles. The side lights of bay-windows and the shop windows are filled with leadwork, and all other windows provided with wood casements opening outwards. The cottages throughout are constructed with cheap but sound and durable materials ; they serve as an illustration of the effect which may be obtained even in economical buildings by a judicious arrangement of such materials. The cost of each building, except that with shop attached, is about £140, and the rent of each will be from £13 to £14 per annum. The builder is Mr. J. Walter, of 8. Giles’ Terrace, Oxford ; and the architect, Mr. Clapton C. Rolfe, of Oxford.”