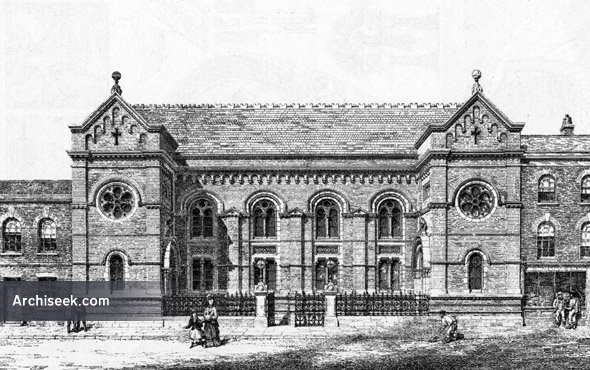 As published in The Building News, March 25th 1870. “WE give this week an illustration of the proposed new chapel for the Baptist congregation formed in 1797, which has been projected by the present pastor, the Rev. I. M. Soule, who has held that office for the last 32 years. During that period above £5000 has been expended on the old chapel and the schools. The new chapel will occupy the site of the old, which has been widened by the purchase of the adjoining land required. It is designed to accommodate about 900 persons, and is estimated to cost about £3500.

The architect is Mr. E. C. Robins, of Southampton-street, who has chosen the Romanesque style, as most readily adaptable to the exigencies of the site, which is still much confined. Galleries on three sides are provided, that at the end being considerably deepened by its extension over a weekly meeting room for 100 persons. The building will be faced with white bricks, with Bath stone dressings, and is to bo commenced at once.”