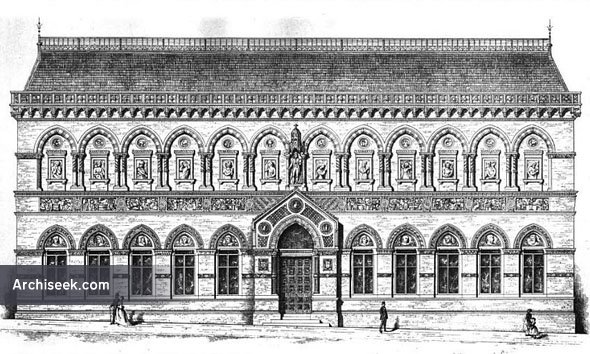 From The Architect and Contract Reporter, April 17 1869: This building is announced to be opened on tho _’ Ui inst. by the Earl de Grey and Ripon. the Lord President of the Council. The foundation-stone was laid by the present Premier, and there could have been no greater honour bestowed on the memory of Josiah Wedgwood, than was paid by Mr. Gladstone, when he read, on that occasion, an elaborate written address on the character and career of the great potter, which was subsequently published.

The building is erected in Wedgwood’s native town, and is intended to serve the purposes of a Free Library and Beading Room on the ground floor, while the upper floors are designed for a School of Art and Science. It is so disposed, as to plan, that it can be extended hereafter, if local necessities require it, for the educational uses of the town and neighbourhood. For the present the accommodation is presumed to be sufficiently ample.

The first floor, for the purposes of a school of art, comprises a museum or exhibition room, elementary class mum-, ladies’ class room, and painting room. A modelling room and a master’s room are also provided; a chemical class room la placed on a second floor. All these apartments are top-lighted; the roof is carried on cast iron girders, semicircular on the soffit, and the building generally is fire-proof in its construction. The ground floors are carried on brick arches, and the first and second floors are formed in Dennett’s patent concrete, carried, in the larger spaces, on rolled iron girders.

The architectural treatment of the building will no doubt carry some interest with most readers from the fact that it is composed almost entirely of the clay material, from its simplest masses of brickwork up to the more elaborate detail which composes the external design.

The idea of erecting a building of a purely ceramic character, as the memorial of Wedgwood””’ the father of the English potteries'””was first initiated by Mr. Beresford-Hope, M.P. I have striven to realise that conception as worthily and completely as the present resources of architectural pottery will admit of. But it must be said here that any attempt in that direction would have been of a very partial and limited character, if the authorities at South Kensington had not come forward to subsidise the scheme of ceramic treatment by employing and paying the modelling work which was necessary to embody the design in the clay material. Under this arrangement two ‘ national scholars'””Mr. Rowland Morris and Mr. Robert Wright”” were selected from the Potteries Schools of Art, and the whole of the terra-cotta details requiring modelled treatment have passed through their hands, the different varieties of ornamental detail having been executed by them from the architect’s designs. The more sculptural and figure subjects were entrusted to Mr. Morris. There is unusual variety observable in the designs of the ornament; the bands which are introduced midway in the piers of the ground floor windows are very varied, and bear the’ monograms of the different names of persons who have been concerned in the erection of the building. The impost course and the archivolts of these windows are also designed on various motifs, though it is only possible to produce, by way of illustration, on the sheet of details given herewith, one or two of the varieties which the building exhibits as it stands.

Between the ground and first floor a deep band or frieze runs the entire length of the building, composed of panels corresponding to the bnys given by the -windows; these represent the different processes of the modern manufacture of pottery, from its first stages in the raw material to those of its finished productions. It is to be noted in regard to this frieze that, in common with all the sculptural portions of the design, the work, as placed in the building, is that of the modeller himself, and is, in this respect, an original terra-cotta work, similar to the treatment we are familiar with in the sixteenth century Italian art in the same material. It deserves also to be noted that the whole of the terra-cotta work, whether it appears as sculpture or foliated ornament, is purely and essentially constructive as part of the building. None of it is veneering, but the work it performs is as necessary to the stability of the structure as that of the bricks which compose the walls.

A reference to the elevation of the building will discover a difficulty in the way of the architect which most professional readers will readily appreciate. The whole of the exterior, above the groundfloor windows, is a blank, dead wall, the first-floor being lighted from the roof. Whether this difficulty has been successfully grappled “¢with or not is, of course, a matter of fair criticism. Ihe first floor is treated as nn arcade, formed by coupled columns in dark buff terra-cotta, and the successive bays are occupied by sculptured representations of the months of the year, modelled in red terra-cotta clay and framed in the same material, with an architectural design “¢which recalls the treatment, in similar conditions, of the North Italian sculptors. Over these panels, and occupying the tyuipani of the arcade, are inserted representations of the Signs of the Zodiac, corresponding to the month panels; these are executed in Venetian mosaic on a gold ground, by Salviati.

The greater portion of the terra-cotta detail of the building has been moat faithfully produced by Messrs. Blanchard & Co., while the sculptural frieze of ‘ process panels’ has been manufactured by Mr. Blashfield, of Stamford, to whose credit it may be stated that these pieces, weighing many hundredweights each, have been fired and fixed in their places without flaw or accident.

The general contractor for the works was Mr. Alfred Barlow, of Stoke-upon-Trent. Mr. Mathews, of Manchester, acted as Clerk of the Works, during the erection of the building.