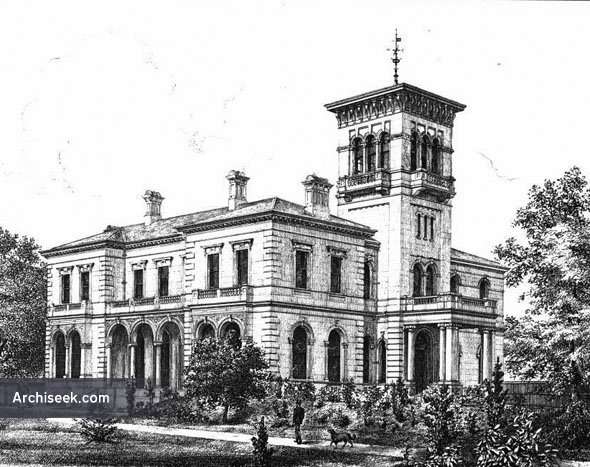 From The Architect and Contract Reporter, October 30 1869: Our illustration of this week represents a subject of much interest to our non-professional readers. The English gentleman’s house””the something which, without being a ” villa,” is not a ” mansion “””is somewhat rare, and perhaps nothing is more calculated to test the skill of the architect.

Everybody who has had the misfortune to engage in house-hunting knows the ill-planned and unarchitectural structures offered by the speculative builder, which lack almost every essential to home comfort and convenience, whilst they outrage taste by their appearance.

Doubtless as wealth, with its accompanying education and improved taste, increases, such things will not be tolerated, and the Englishman will expect the same care and taste in his home as he now does in his church and other public buildings. “Highfield” is erected externally of Bath stone, and internally the central hall is also of stone, somewhat elaborately carved with natural foliage, fruit, etc.

The windows of the staircase are filled with stained glass, the subjects being from the history of Gloucester, executed by Messrs. Lavers & Barraud. The bronzes and gallery railing of the hall aro of French manufacture. Doors and windows generally are of oak or mahogany. The pavement of the hall is of Sicilian and black marble. The iron-work of the entrance-gates is entirely wrought, and was the work of Mr. Letham, of Cheltenham.

The whole was designed and carried out by Mr. John Giles (now Giles & Biven), of 28 Craven Street, Charing Cross (Messrs. Jones, of Gloucester, beingr the builders, and Mr. Seale the carver), at a cost of about 12,000/., which sum included stables, lodge, &c.