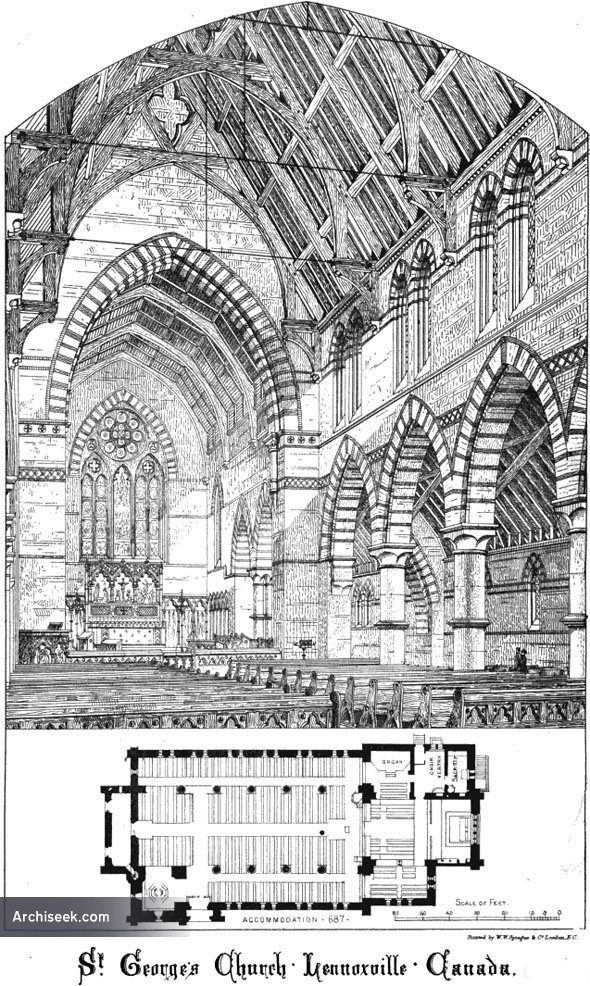 From The Architect and Contract Reporter, February 20 1869: Lennoxville is a considerable and still growing village, in the eastern townships of Canada and province of Quebec. It is the centre of a population of British and American descent, and in close proximity to the village has been erected the University of Bishop’s College, the chief seat of education, in connection with the Church, in the two dioceses of Montreal and Quebec.

For many years a congregation has existed at Lennoxville, and the increasing number of members has made it imperative to provide additional accommodation ; and for this purpose it was wisely determined to erect a new church, rather than to attempt to enlarge and alter the present poor and ill-ordered building.

For this purpose I have prepared plans for a church to accommodate 687 persons, my aim having _been to design a building sufficiently dignified for its important position in the province, and yet simple in its details and moderate in its cost. The church will be built of local brick, red and black being used for the exterior, and white and red for the interior. The black on the outside and the red inside have been sparingly used, and in purely architectural lines. Stone is difficult to obtain, but a white marble is much used, and the simple forms of the capitals and window tracery have been designed for its use. The nave and chancel piers are of polished red Aberdeen granite. The reredos, pulpit, chancel screen, and some other fittings will be added aa funds allow, and will probably be worked in England. All the windows are to be double glazed, the exterior glazing being of plateglass, in wrought-iron frames, the interior, cathedral or painted glass. All the entrances have double doors. – C. Hodgson Fowler