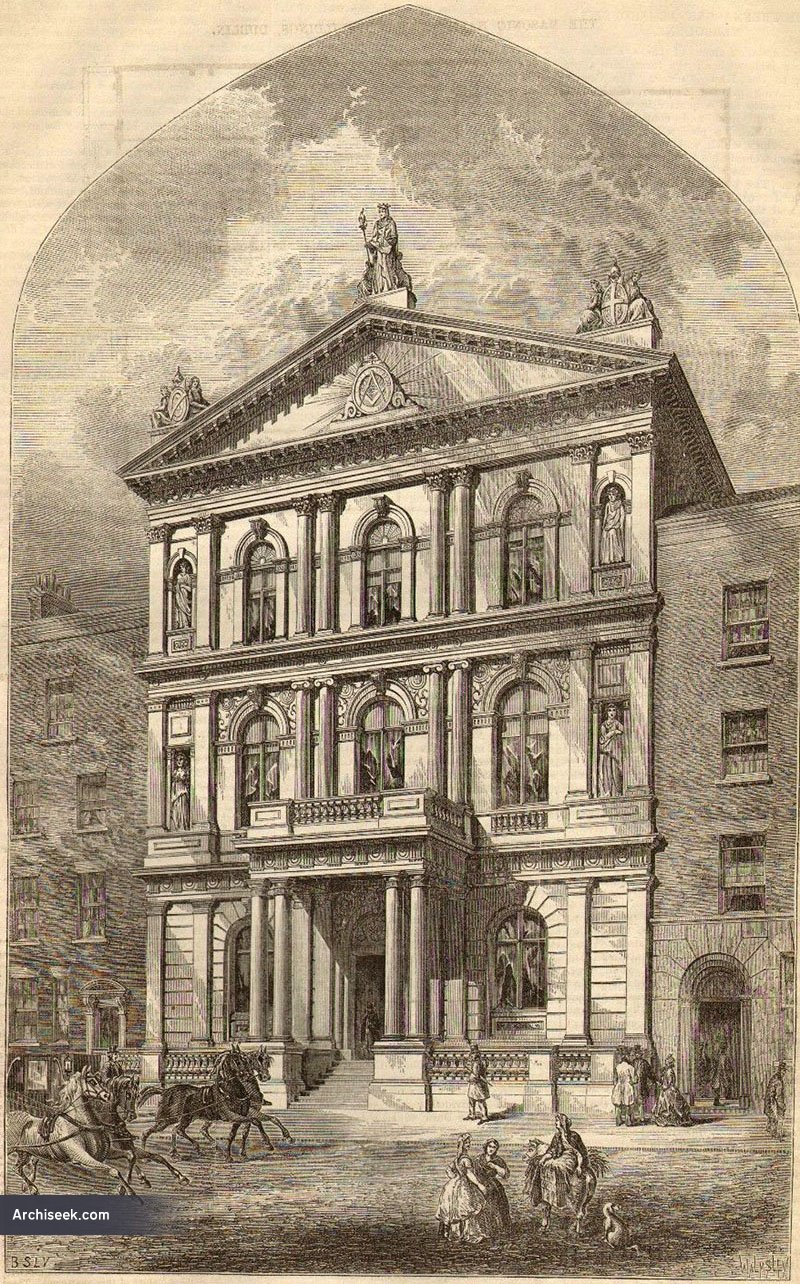 Built on the site of the townhouse of their first Grandmaster, the Earl of Rosse, this building was completed in 1866. The result of an architectural competition, it was designed by Edward Holmes of Birmingham. An unusual face for Dublin, the architect used three orders: Doric, Ionic and Corinthian. The pediment contains the Masonic square and compass.

Described in The Building News, January 17, 1868: ” A new masonic hall and club-house is now being erected on the north site of Molesworth-street. The front elevation (Italian style) is divided into three styles ; the lower one is of the Doric order, the centre of the Ionic, and the upper of the Corinthian. It has been executed in Ancaster stone. The whole is surmounted by a pediment (the entire width of front), in the centre of which are the masonic emblems. The height of the building from ground line to top of pediment is about 73ft. The design is by Mr. Edward Holmes, of Birmingham and London, and was selected in a competition in the early part of 1866. Mr. Meade, of Great Brunswick-street, is the contractor. The cost will be about £8,000.”

The Interior is a riot of colour and architectural styles and themes. The Royal Arch Chapter room is an egyptian theme; the Prince Mason’s Chapter room is Gothic Tudor; and the Kinghts Templar room is designed as a medieval chapel.

The interior decorative schemes were described in The Irish Builder in December 1877 when the building officially opened. “The hall within has been subject to an elaborate process of decoration by painting, gilding, &c. The apartment is larger than St. Patrick’s Hall, Dublin Castle. It is a parallelogram in shape. Along each side are six pillars with Corinthian capitals, and there are two of the same style at each end. These are painted to represent white enamel. The capitals are gilt ; the pedestals and lower part of the wall are painted a rich chocolate colour; between the pillars the wall spaces are painted a light dun colour, each space being formed into a large panel by a matted gilt moulding with a deep margin of grey. The pillars support a richly-designed and gilt entablature. From this spring five semi circular arches on each side. These arches contain a series of ten cartoons, illustrative of the building of Solomon’s temple. The ceiling is intersected by beams, which divide it into five panels, and is painted blue, and studded with gold stars. The intersecting beams, together with the architrave and cornice, are cream colour and white, relieved with gold. The predominating colour in the painting of the hall is blue, in order to meet Masonic requirements, that colour being associated with the lower ranks of the order, and the hall being used for general meetings ; but other tints are introduced in sufficient abundance. The cartoons have been painted in sepia by Mr. Edward Gibson, Great Russellstreet, London, son of Mr. James Gibson, of Mary-street, Dublin, by whom the entire of the rest of the hall was designed and finished, and whose design was selected in a competition by Messrs. T. Jones, President of the Royal Hibernian Academy, and Brother Drew, R.H.A.”