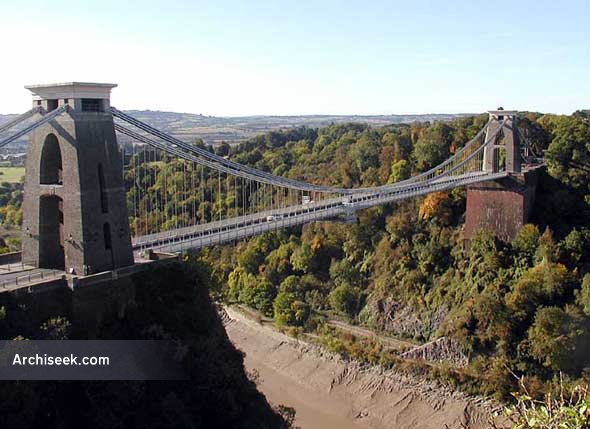 The Clifton Suspension Bridge, spanning the picturesque Avon Gorge, is the symbol of the city of Bristol. For almost 150 years this Grade I listed structure has attracted visitors from all over the world. Its story began in 1754 with the dream of a Bristol wine merchant who left a legacy to build a bridge over the Gorge. 24 year old Isambard Kingdom Brunel was eventually declared the winner and appointed project engineer – his first major commission.The foundation stone was laid in 1831 but the project was dogged with political and financial difficulties and by 1843, with only the towers completed, the project was abandoned. Brunel died aged only 53 yrs in 1859 but the Bridge was completed as his memorial and finally opened in 1864. Designed in the early 19th century for light horse drawn traffic it still meets the demands of 21st century commuter traffic with 11-12,000 motor vehicles crossing it every day.

“We publish this week a view, and a page of details, of the Suspension Bridge, Clifton, Bristol, commenced many years ago, and at length in course of completion with some important structural modifications. The bridge was commenced under an Act of Parliament in the year 1830. The original estimate was made by Telford, and amounted to 52,0002. The design on which the work was begun was furnished by the late Mr. Brunei, the estimated cost being about the same as Telford’s. The money which became first applicable to the construction of the bridge was bequeathed by Mr. Wm. Vick, in 1753. Contributions from numerous persons in Bristol and its vicinity were added; but no company was formed, and the funds subscribed were at no period sufficient to cover the estimated cost. Still, it was considered of so much importance to obtain a communication between the counties of Gloucester and Somerset, that the work was commenced. All the land was acquired; and the piers, involving a heavy amount of solid masonry, were completed, as were also the approaches on the Gloucestershire side, all the preparation for anchorage, and the principal part of the excavation for the approaches on the Somersetshire side. But, ultimately, in consequence of the insufficiency of the funds, the works were stopped, the total money expended having been 45,0002.; and in that stage the undertaking remained till a very recent date.

The Hungerford Suspension Bridge, to which we must now pass, was designed by Mr. Brunei, and completed in 1845. That bridge, being to be taken down, in order to construct a girder bridge for the railway from Charing-cross to London Bridge, the opportunity was afforded for completing the Clifton Bridge with the chains set at liberty from Hungerford. Examinations were made by Mr. Hawkshaw and Mr. Barlow, who found that, with certain modifications in the design, the Hungerford chains might be adapted to the piers, and to the preparations for anchorage, at Clifton. So much being ascertained, the promoters entered into three agreements:””

Mr. Hawkshaw and Mr. Barlow then found themselves able to state, that to construct the bridge, 24 feet wide, viz., a roadway of 16 feet with two footways of 4 feet each, the total cost and that of completing the approaches, lodges, gates, fencing, &c, would not exceed 27,000/ , exclusive of Parliamentary and other contingent expenses. Negotiations were commenced with a large landed proprietor on the Somersetshire side of the river, respecting an increase of width of the bridge to 30 feet, the additional cost being estimated by the engineers at about 5,000/. The promoters considered a width of 24 feet sufficient to meet all requirements of the traffic. The larger dimension is now within that of the actual width.

The bridge, when completed, will place Clifton and Clevedon within a morning drive of each other, shorten the distance from Clifton to Portishead and the beautiful district about it to seven miles, and be subservient to considerable traffic in farm and market produce from the district west of the Avon, to Clifton and Redland, which places cannot now be reached by carriages and vehicles without passing through Bristol, and thereby involving, as compared with the road across the bridge, an increased distance of four miles and two very high and steep hills.

One of the districts adjacent, remarkable for beauty, is that of the Leigh Woods. This ground is about being laid out for the building of suburban residences. We trust that the arrangement and particular designs of the villas, will be under more than the usual amount of professional control; or the beauty of the locality may suffer.

The span of the bridge, or measuring from centre to centre of the piers, will be 702 feet 3 inches ; and the height above high-water mark will be 215 feet. The tide rises and falls about 25 feet. Tho other dimensions given are,””deflection of chains, 70 feet; width, 31 feet; and strength, 7,000 tons.

Considerable progress has now been made. The temporary suspension-chain, forming the scaffold for conveying and fixing the permanent chains, is carried across and in active use. The anchorage plates, lately arrived from the contractors’ works,

weigh nearly three tons each. There will be three of these plates to each set of chains, embedded in the rock. The “paying-out” machine, for the wire ropes of the temporary bridge, designed by Mr. Airey, the resident engineer, consisted of three frames of iron, with powerful spur gear applied to the main axle of the machine, and on that axle a drum, 2 feet 6 inches in diameter, in which are fixed twelve screws, on the outer ends of which there are six iron plates, and wood ” packings ” with additional plates for forming a flange on each side. The coil of rope being placed over the drum, and the plates and ” packing ” pnt into position, the whole was tightly screwed, thus forming a centre on which the coil could revolve. The inner end of the coil being firmly secured to the drum, placed the rope perfectly under the control of the men, so that they could either ” pay ” it out, or draw it in. A more simple machine, it is said, could have been made for paying out the ropes; but this can be used likewise for drawing them in, when the temporary bridge is completed; and hence it was necessary to make it somewhat more elaborate and heavier than would have been required for the simple purpose of “paying out.” In the use of the machine for paying oat, each coil before being paid out, has to be fixed in the machine in the way described, and much caution is needed in placing it on the ” rests,” which are fixed on the top of the piers to prevent the possibility of the ropes being injured. As soon as the rope is got over on to the paying-out machine, it is connected with the fixings in the anchorage shaft, and then placed in the saddle on the top of the pier, where it passes over pulleys 5 feet in diameter, which are hung in blocks on the pier; the pulleys are lowered, and the communication made on the other side, the rope being fixed to the anchorage on that side, as already described. To show the strength of the anchorage, it may be stated that the ends of the ropes were secured into the shafts by four balks of timber bolted together, and firmly bedded into the rocks with bricks and cement. There were likewise powerful screws at each end of the ropes for adjusting them equally. As each wire rope was drawn from the Clifton side to the Leigh Woods side of the river, a hempen rope, of 11 inch in diameter, had to be drawn with it for the purpose of bringing back a larger one to the Clifton side to repeat the operation. The machinery on the Leigh Woods side for drawing the ropes over, consisted of two powerful double-purchase crabs with grooved barrels. They were securely fixed to a massive frame of timber, and the rope was passed over the barrels, the machinery thus forming what is known as a ” fleeting” crab. It is not, however, generally used, but it is much more effective than the old crabs, especially where there is a great length of rope, inasmuch as it is kept in one position all through, never requiring the “fleeting” or moving of the barrels. The wire-rope, as uncoiled, measures 1,100 feet in length. It was coated with oil and tar as it was unwound from the crab, and slowly made its way up tho incline, drawn by the two powerful crabs on the Somersetshire side. Two hundred feet having been paid out, it was necessary to make everything secure,and then serve that portion of the coil resting on the “saddles” at the top of the pier with an extra coating of canvas and iron wire. Nine coils, weighing two tons each, of this kind, having been suspended, a strong cradle was attached to two of them, and swung down to the centre; and on this, the workmen commenced bolting the planks for the platform, gradually completing the stage as they neared the inclines, the declination of which is about 1 in 2J. The platform is completed; a ” traveller ” is attached to one of the wire cables, and by this machine the chains, &c, will bo conveyed to any part of the platform, above which the suspension-bridge will bo erected. The platform has consumed about 5,000 superficial feet of l}-inch boarding. Messrs. Cochrane & Co., of Dudley, are the contractors. The engineers are Messrs. J. Hawkshaw and W. H. Barlow, as already stated.

The promoters estimated the receipts from traffic at 3,270/. per annum, but the late Mr. Robert Osborne, who went carefully into the subject in 1844, estimated them at 4,034/. per annum.” As published in The Builder, August 8th 1863.