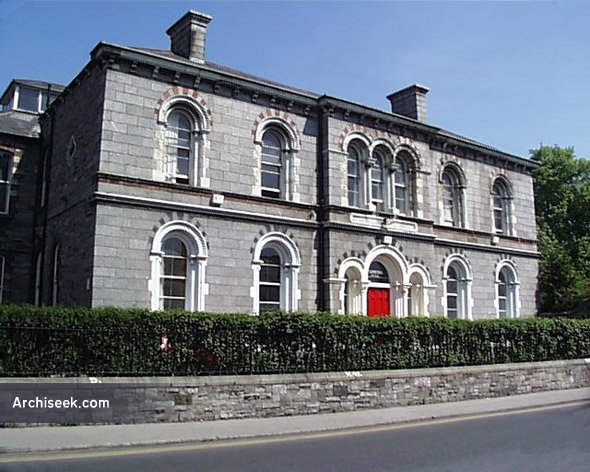 Designed in 1864 as a school of medicine beside the three northside hospitals (Brunswick, Richmond and the Hardwicke, all now closed), the Carmichael building is now office accommodation. J.E. Rogers was the favourite student of Benjamin Woodward and the building’s design reflects his education. Built in a Lombardesque Revival style and with some sculpture similar to Deane & Woodward’s Trinity Museum, Rogers unfortunately didn’t have the funds available to him to design a staircase similar in scale to that in Trinity.

“The new Carmichael School of Medicine, of which an illustration is given with present number, is rapidly approaching completion, and has been erected, in accordance with a provision in the will of the late Surgeon Richard Carmichael, who made the munificent bequest of £8,000, to be devoted to the cost of the building and the purchase of the ground.

It will be remembered that the first stone of the New School was laid by his E,xcellency the Earl of Carlisle on the 29th of March last, so that it is evident that the works have been pushed on with vigour from that time. The materials used in the construction are granite, black stone, Tullamore limestone, Portland, Caen, and Cumberland red stone. Tlie front is faced with rough punched granite ashlar, which contrasts well with the Caen and Portland stone of the dressings ; the glitter and corbels supporting it are of Portland, as are all the projecting strings and hoodmoulds. The flanks are faced with black stone for the sake of economy ; indeed, it may be well to remark that the extent of the building, the serious and unavoidable extra upon the foundations (nearly £400), andthe sum at his disposal, prevented the architect from indulging in any decoration except upon the front, and there only sparingly. When we consider the number of rooms it contains, and the area which the building covers, the new Carmichael School must be pronounced a remarkably cheap building at £6,000, which will be about the cost when everything is completed.

The roof over hall and staircase is arranged in a novel manner, being a hammer beam carrying a lantern. The dissecting-room roof is a king post, span 21 feet; the anatomical and chemical theatres 25 feet span, queen post.

The lift has been constructed by Messrs. Ross and Murray, of Abbey-street.

The decoration round the entrance door is something new in Dublin, the ornament (conventional foliatie) is incised to a depth of about | of an inch and then filled up with Keene’s cement, coloured as may be desired—the most effective colour for outdoor work appear to be black and red. This mode of decoration is less expensive than carving, very durable, and has the advantage of not catching the dust and dirt in the open air.

The dissecting-room floor is tiled, being formed of brick arches carried on iron girders 10 feet apart. The floor has been executed in accordance with the directions of W. Anderson, Esq., C.E., of Messrs. Courtney and Stephens, Blackhall-place. Tlie advantage of this floor is, that it can be easily flushed with water, which, in a dissecting room, is verv desirable. There is a Portland stone channel course along one wall of this room towards which the floor has a fall ; the water is carried out by a pipe through the wall to the drain.

The stairs are granite, with an ornamental iron balustrade set in a Caen stone plinth supporting the handrail.

The upper arcade of the staircase is formed with three flat arches, carried by Portland stone piers with carved capitals and bases ; the parapet of Caen stone is pierced with a geometrical pattern. The proprietors have adopted the system of electric bells. The carvings have been very creditably executed by Mr. Harrison, under the directions of the architect.

We feel it a duty to record the generosity of Mrs. Carmichael, the widow of the founder, who has nobly endeavoured to second her husband’s munificent intentions by placing the money at the immediate disposal of the proprietors, instead of reserving it for her use, as she might have done, until after her death.

The architect of the building is Mr. James Edward Rogers, 205, Great Brunswick-street, on whom the design, however simple, reflects the highest credit. The different materials used in the exterior are artistically and quietly disposed, and the details are bold and good, and sufficiently uncommon to deserve more than ordinary notice, in asmuch as they are a step towards what we yet hope to see universal in practice. The vigour and beauty of Gothic detail applied to buildings which, save for these, would present the familiar appearance in general disposition of their parts, of what some people call the ” common sense ” school. The public, right or wrong, will have buildings of this type, and are so wedded to it that we are never likely to see a revival of the picturesque type of Gothic to any extent : and it appears far from impossible to engraft on this accepted style some of the boldness of Gothic treatment, without either bad taste or incongruity.” The Dublin Builder, October 15 1864.