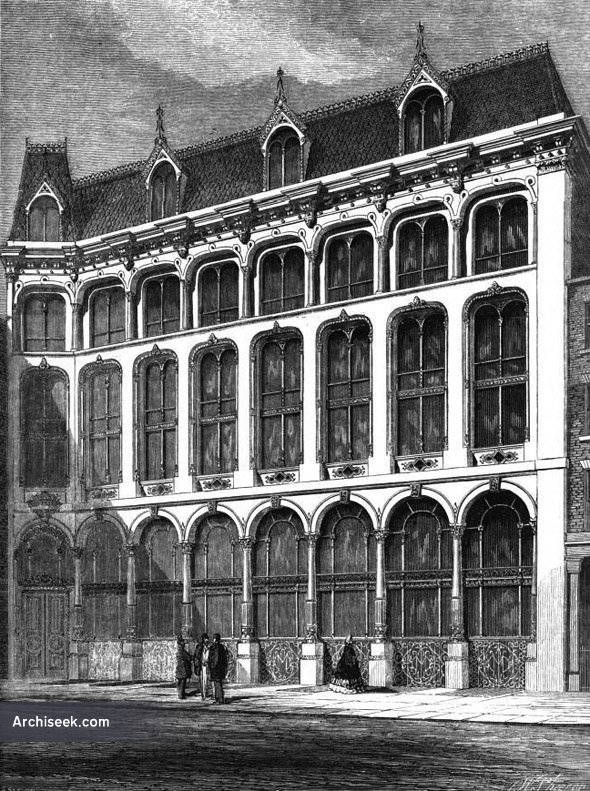 “The warehouse that has just been erected in Bow Churchyard for Messrs. Copestake, Moore, Crampton, & Co., as an addition to their present extensive premises, was commenced in the autumn of 1861, and is now fast approaching completion. Considerable delay was occasioned at the outset in consequence of the discovery of an ancient brick arched gallery, 13 feet wide, 10 feet high, traversing the entire length of the site, and containing 300 yards of solid soil. It is thought that this passage was a portion of a subway for the escape of fugitives from the sanctuary of St. Mary-le-Bow to the river.

The clearing out of this gallery (which had been used as a cesspool for centuries) for the purpose of getting a solid foundation for the internal iron columns retarded the works, as it could necessarily only be done at night. It was afterwards still further excavated on either side, and forms a sub-basement at a level of 23 feet below the street paving. The building consists of sub-basement, basement, ground and five upper floors. The sub-basement is a store for packing cases, &c.: the basement, ground and four upper floors are devoted to the various branches of Messrs. Copestake’s business. Additional light to that obtained from the front is provided by a well 51 feet 6 inches by 13 feet 6 inches, extending throughout the floors, and terminating with a curved glass lantern. Over the fourth floor is a fireproof flat, on which are built the kitchen -and offices for the accommodation of the entire establishment. The roof is covered with thick zinc plates stamped to a scale pattern, specimens of which were exhibited in the International Exhibition last year. They have been recently used in Paris, but are new to this country.

Access to the new building is obtained solely from the old warehouse, the floors of which are on the same level, and consequently some difficulty has been experienced in the treatment of the window openings in the facade to mitigate the want of height in the floors. The front is of Portland stone, and the openings are filled in with enamelled bronzed iron sashes from designs furnished by the architects. Peterhead granite and serpentine marble have been used in the small columns and panels of the elevation. The carving has been well executed by Mr. Bedfearn: the caps to the granite columns and the cable moulding round the second floor windows deserve notice.

The front arches are carried on large cast-iron columns made by Bunnett & Co. (who also made the sashes), the caps and other ornaments having been cast separately. Mr. Anley is the builder, Mr. Cooper the clerk of the works. The cost, exclusive of fittings, is about 15,0002. Messrs. Tress & Chamberlain are the architects. ” As published in The Builder, January 17th 1863.