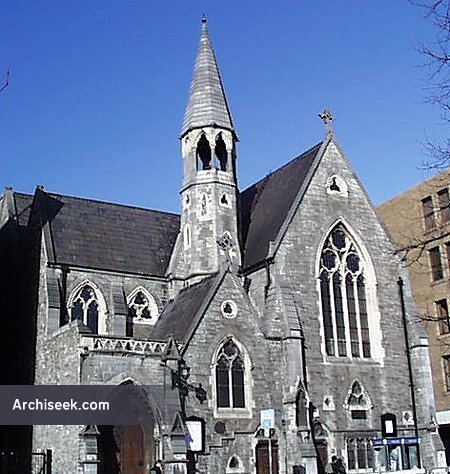 The winning entry in an architectural competition, this little church uses as much of its constricted site as possible. Originally it was surrounded by houses, but these were pulled down and replaced with yellow brick clad offices in the 1970s. The church is placed over a church hall and has a nave, single aisle and transept. The large window in the picture above is actually the end of the transept and not as supposed the end of the nave, as the nave runs north-south. The church has a fine interior.

The church is accessed via a short flight of stairs into the aisle beside the transept. The church is quite small, three bays long with some large stained glass windows to the west and north. At the southern end is the organ. There is a small balcony in the transept.

There is a wealth of detail in the building from the decorative capitals on the columns, the sculptures of angels as corbels, and quite a few memorials. The church has good quality pews, all with an uninterupted view of the altar area. Above it all is a lovely wooden roof held aloft by a small choir of angels.

“A short time since we announced that the designs for this edifice submitted in competition by Messrs. Lanyon, Lynn, and Lanyon, architects, had been adopted. Estimates for the erection have since been obtained, and Messrs. Hammond, of Drogheda and Dublin, builders, were declared contractors. They are now proceeding with the building, which—as may be judged from our illustration here with—promises to be, when completed, a great acquisition to the architectural features of this city. The external walling will be of squared granite rubble, and the decorative portions, both external and internal, of Bath stone, from the Box quarries. The plan is somewhat peculiar, and presents a church of ” shape, with nave 55 feet 6 inches by 28 feet, one side aisle 14 feet in width, and a one-arm transept. Through the principal doorway shown on elevation approach is obtained to the church by a spacious ascending flight of steps, as also by a descending flight to a portion of the basement storey, comprising committee-room, &c. The other doorways lead respectively to the male and female schoolrooms, each 28 feet by 24 feet, in basement also, and to the gallery, which occupies the transept. An engraving of the interior, at present in course of preparation, will illustrate its features. The columns shown on the pinnacled turret will most probably be of polished limestone, which would contribute increased effect. A commodious residence for caretaker is provided at the rere. The expenditure will be about 5,000.” The Irish Builder, March 1 1862.