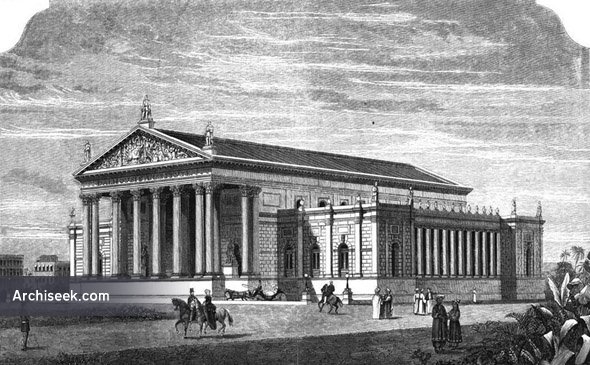 “In our last volume we mentioned that the first premium (300?.) had been awarded to Mr. C.Q. Wray, architect, for his design for the Dalhousie Institute. We now give illustrations of the design. The Institute, as we stated at the time, is intended to cost 25,000?., which sum has been collected. It is intended to be built on a site adjoining Government House. The large hall is to be used as a concert and public-meeting room, and will accommodate 1,000 persons seated. It is also to be appropriated to the reception of statues and other memorials of distinguished men. On either side of it are lecture-rooms, lavatories, and an extensive library. The design, externally, may be described as a Corinthian prostyle temple, octastylos; with a lower building, Ionic, on each side. The two outer columns on each side in the portico are close together, and the tympanum is tilled with sculpture. Three statues take the place of acroteria on the pediment. The great hall has single Corinthian columns with antae projecting from the wall, on each side at intervals, and a vaulted ceiling, panelled, with lunettes above the entablature of the order. A recces at one end will receive an organ.” As published in The Builder, January 24, 1863. Demolished in 1950.