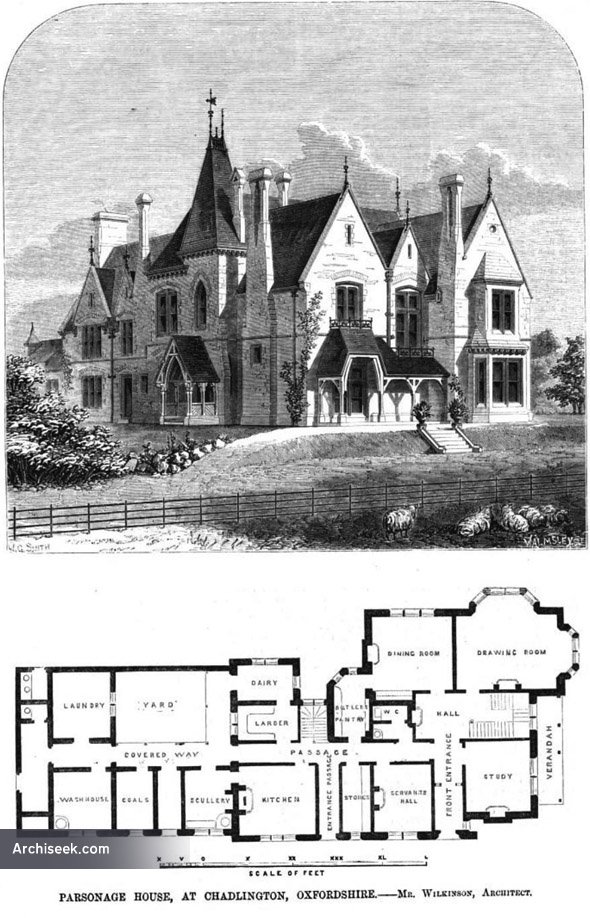 “This house, which has just been completed, has been built by the late Mr. J. H. Langston, M.P. for the city of Oxford, of Saraden House, near Chipping Norton. The village is a hamlet of Charlbury, of which Mr. Langston was the principal landowner; and the house has been built by him, to provide for a resident clergyman in the village, it having been his wish to carry out an arrangement with the patrons of the living of Charlbury, by which he would have made a gift of the bouse and certain lands, in consideration of the patrons giving up a portion of the living, which is worth as much as 8001. per annum. An arrangement, however, for the present at all events, is interrupted by Mr. Langston’s death, which has taken place since this view has been in preparation. The varied outline of the building renders it somewhat ornamental and picturesque, although plainness of detail has been observed throughout. The roof is covered with an extremely durable local stone slate, and most of the materials used, including the walling and freestone, the bricks, and oak timber, have been obtained from the estate. Nearly the whole oi the work has been executed in a most creditable manner by his own workmen, acting; under the direction of Mr. H. Andrews, his agent. Every care has been taken to render the building satisfactory in all respects; and the architect has been fortunate in having his details carefully observed. The cost has not yet been ascertained. Mr. Wilkinson, of Oxford, is the architect.” From The Builder, November 7 1863.

The church and schools at Milton, the church at Churchill, and the schools at Lynehaxn, besides many other buildings of a useful character in the neighbourhood, are also works due to the liberality of the late Mr. Langston.