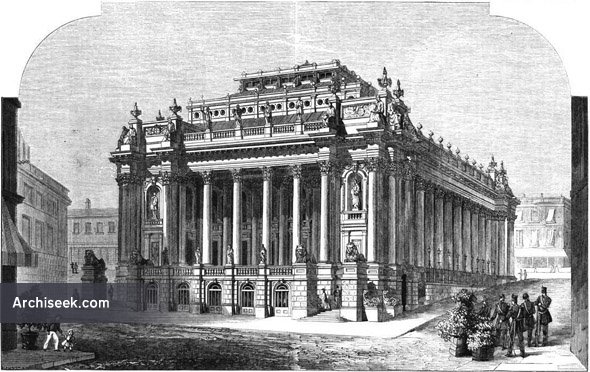 “The new Opera House at Malta is one of several important public works for the embellishment and improvement of the island which have marked the rule of the present governor, Sir Gaspard le Marchant, Bart. It is situate at the entrance of Strada Reale, the principal steret in Valletta, and has been designed by Mr. Edward M. Barry. The auditory will contain ninety private boxes, in four tiers, accommodating, with pit, stalls, and gallery, upwards of 1,200 persons. As land in Valletta is exceedingly valuable, the ground-floor of the theatre under the side corridors, and also the lower part of the terrace in front, are occupied by shops; and, according to Maltese custom, residences are provided in the building for the principal artistes. Special arrangements have been devised to withstand the heat of the climate, and fresh air will be conducted to all parts of the house. The saloon, or crush-room, is placed over the entrance-hall, and has five windows, with balconies overlooking the terrace. The painting room and the necessary workshops are in the roof, which has been designed to admit of thorough ventilation. It is constructed of queen trusses, of a span of sixtyfour feet, the queen posts of which are carried up to support an attic with louvre windows and bold projecting eaves. The decorations of the interior will be white and gold, and the lighting will be by a sun-burner, or by the mode recently introduced into the new theatres of Paris in the Place du Chatelet. The buildiog is being constructed of the excellent stone of the island. The works in Malta are being carried on by a native contractor, under the supervision of the architect’s clerk of works, Mr. J. Poulson. The carpenter’s work, ironwork, stage, and decorations, are to be prepared in England, and have been entrusted to Messrs. Eramerson and Murgatroyd, of Stockport. The building is expected to be completed next year.” As published in The Builder, May 2 1863.